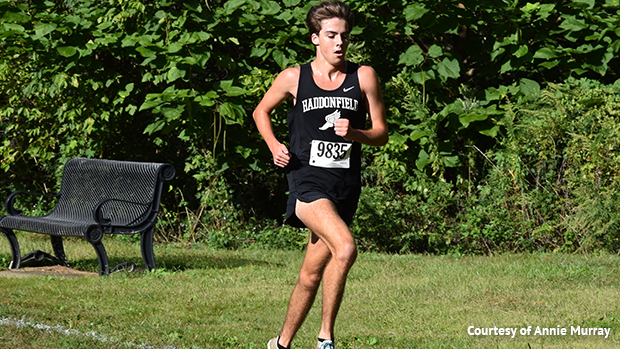 Going into the race, Haddonfield held a 235-consecutive win streak in colonial conference dual meets: a win streak that has lasted since 1997 and one of the largest running win streaks in all of high school sports. In order to further their win streak to 238 consecutive wins, the Bulldawgs had to defeat Haddon Heights, who possessed the talents of Jack Bolling and Colin Patterson. Going into this race, both runners had the 3rd and 4th fastest 5k times in all of Group 2 (Bolling running 15:48 and Patterson running 15:49), and a team that currently ranks just 2nd behind Haddonfield in Group 2.

Haddonfield would extend their dominance in the Colonial Conference with a winning score of 23-35. George Andrus won the merge with a time of 15:38, while Bolling and Patterson finished 2nd and 3rd (15:59 and 16:07). Ian Romea, Robert DiMedio, Matthew Sullivan, and Donnie Jellig would follow suit finishing 4th-7th and confirming the Bulldawgs' victory. Ryan Wells (17:27) and Reggie Hernandez (17:32) were the Garnets top finishers, who finished 8th and 10th. Haddonfield and Haddon Heights had the first 18 finishes of the entire meet (Haddonfield-11; Haddon Heights-7), sending a message to the rest of the Colonial Conference and the entirety of Group 2.

This win would be one of Haddonfield's slimmest margins of victory in a dual meet since their matchup against Haddon Township in 2015, where the Bulldawgs won 22-35. While the Garnets came up just short, they showcased a team talented enough to pose a threat to many in the coming postseason meets, where they hope to avenge their loss against the Bulldawgs at the Sectional and Group Championships

While some may center their training around a significant race like this, Haddonfield's George Andrus says he and the team trusted their training and felt there was no need to change their training regimen to prepare for the race: "We all trusted our training. We're a very fit team right now. We just ran for each other and did what we needed to do." Andrus went on to talk about a big meet coming up for Haddonfield later in the week: "The strategy for me was a nice hard run. Nothing too crazy because of Bowdoin on Saturday but just a nice run to win. I let the two Heights boys take it out because I knew they like to take it out quickly. Once we hit mile 1, I threw in a surge to create a nice gap, after that I just cruised it in to secure us the least amount of points possible."

Many of the country's top teams are scheduled to compete at the Bowdoin Classic this Saturday, including the four highest ranked teams in New Jersey (Christian Brothers Academy, Union Catholic, Westfield, and Haddonfield). The next meet for Haddon Heights is a batch meet in West Deptford Park, where they look to bounce back with wins over Gateway/Woodbury (Co-op), Paulsboro, Sterling and West Deptford. When asked about the tradition and future of the team, Andrus was noticeably proud of the performances from his teammates: "We had huge pr's for the younger guys. We had 3 freshmen under 18 (Ryan Gibson, Brandon Stoner, and Luke Andersen) and for being this early in the season that's very impressive... This team is in a great spot." Haddonfield's sub-18 freshmen all rank inside the top 10 list for best freshmen in the state, with Gibson being 1st (17:29).

Andrus mentioned how much of a morale boost this win is for Haddonfield and had high praise for Haddon Heights' team: "Winning this meet is definitely a confidence booster for future meets. We still have to face them (Haddon Heights) for all stars and sectionals too. Add Cinnaminson in there too. The team battle for sectionals and states with those 2 teams has me excited. We're very confident going into the rest of the meets." With the new format for this year's NJSIAA Meet of Champions (reduced the amount of teams qualifying from 20 to 14), expect a tough fight during the Group 2 race between these three teams.