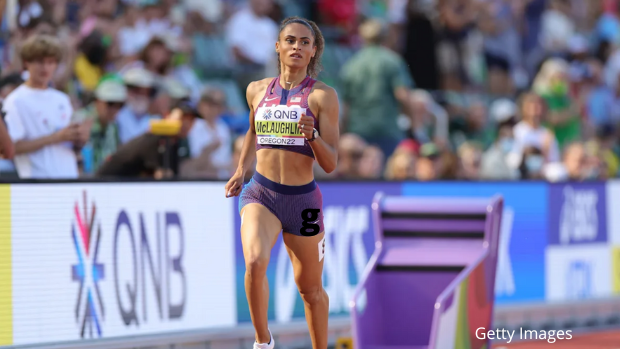 NJ's Sydney McLaughlin, the world record holder in the 400-meter hurdles and the reigning gold medalist in the event, began her quest for another global medal by easily winning her opening round heat, Keturah Orji placed sixth in the women's triple jump, and Sam Mattis finished 11th in the men's discus at the World Championships at Hayward Field in Eugene, Oregon.

McLaughlin, who reset her own world record when she ran 51.41 to win the U.S. title last month on this same track, ran a very smooth and relaxed 53.95 on Tuesday to advance to Wednesday's semifinals. McLaughlin's 53.95 was the second fastest time of the opening round (Femkle Bol of the Netherlands ran 53.90).

The semifinals are scheduled to begin at 9:15 p.m. on Wednesday (it will be shown live on the USA Network). McLaughlin (Union Catholic High -Class of 2017) will be racing in the third and final semifinal heat. The top two finishers in each heat plus the two fastest times will advance to Friday's final, which is scheduled for 10:50 p.m.

Yulimar Rojas of Venezuela, the world record holder and the reigning Olympic champ, won the triple jump for the third straight time with a world leading and Hayward Field record of 50-9.25. Shanieka Ricketts of Jamaica (48-10.25) was second, and Tori Franklin became the first U.S. woman to ever earn a global medal in the triple jump with a 48-2.50.

Mattis, who starred at UPenn, won the discus at the NCAA Championships in 2015, and finished first at the 2019 U.S. National Championships.