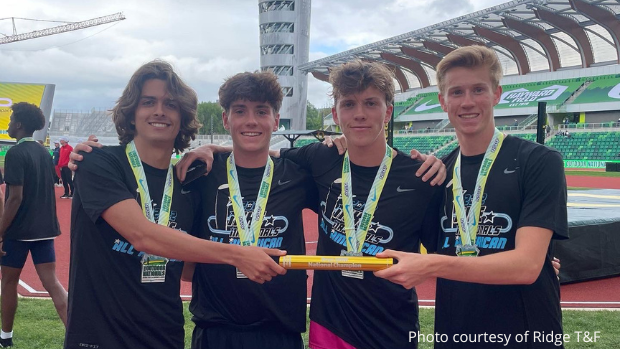 The Ridge boys lit up the track with one of the greatest performances in state and U.S. history when the powerhouse program won the distance medley relay in 9:56.63 at the Nike National Championships on Friday at Hayward Field in Eugene, Oregon.

The only NJ teams to ever run faster than Ridge are St. Benedict's Prep (9:51.97) and West Windsor-Plainsboro North (9:54.78), who ran those times when they finished 1-2 at the 2011 New Balance National Championships.

Senior Andrew McCabe got things rolling when he split 3:06.58 on the 1,200 leg to put Ridge in third-place. Junior Patrick Doran followed with a 50.18 400, and he handed the stick to James Kisker in third-place. Kisker, a senior, then blasted a 1:51.17 to put Ridge in the lead. Jackson Barna then secured the win and widened the gap with a 4:08.71 anchor carry. Ridge won the race by nearly six seconds over Rogue Valley of Oregon, second in 10:02.47.

The victory completes a DMR national sweep for Ridge, who set the national indoor record when it finished first in 9:54.30 at the New Balance Nationals Championships in March.

McCabe, Doran, Kisker, and Barna, who also won the 4x800 at the NB Indoor Nationals, will try to pull off the same double when they return to the track tonight to defend Ridge national title in the 4x800.