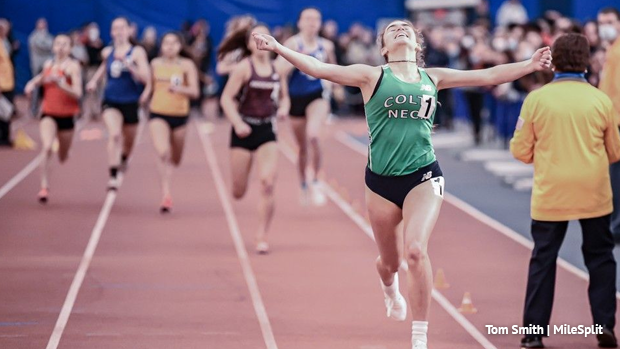 Lilly Shapiro of Colts Neck, one of the greatest distance runners in NJ history, had her legendary high school career come to an unfortunate and premature end due to an injury, Colts Neck coach Jim Schlentz said on Friday afternoon.

Schlentz said the University of North Carolina-bound Shapiro, who has been dealing with pain in her SI joint recently, warmed up prior to the start of the Central Jersey, Group 3 meet at Middletown North on Friday in the hopes that she could race. But Schlentz said the pain was still present, so they decided to shut Shapiro down for the season.

Shapiro's career was simply amazing, and her legacy as one of the best distance runners to ever come through NJ is something that she secured a long time ago!!

To read all about Shapiro's illustrious career, check out our recent in depth Feature Friday Q and A story with her here

Here are some of the biggest highlights of Shapiro's career -

Shapiro's 4:40.15 at the Holmdel Twilight meet is the fastest time in NJ history for a 1,600m race, and is No. 2 all-time on the converted mile list behind Danielle Tauro's 4:39.25 mile in 2006. And her 10:18.36 is No. 11 in state outdoor history, which includes converted 2-mile times. She also racked up numerous county, conference and state titles last spring to lead Colts Neck to one of its greatest seasons ever.

She followed that up with a monster XC season, which was highlighted by a State Group 3 title, a runner-up finish at the Meet of Champions in 17:35 -- tied for No. 4 all-time in Holmdel Park history among NJ girls -- and she was a finalist at the Eastbay National Cross Country Championships. Then, this past indoor season, Shapiro made history yet again when she became the first girl to ever win both the 800m and 1,600m at the same Meet of Champions! That gave Shapiro three M of C titles in her career.

This past April, Shapiro added to her remarkable resume with another jaw-dropping performance when she smashed the state record in the steeplechase at the Georgian Court High School Challenge with a winning time of 6:41.87, the No. 3 time in the nation this season. That sliced nearly five seconds off the NJ record of 6:46.67 that another Colts Neck legend, Ashley Higginson, ran when she placed third at the 2007 Nike Outdoor National Championships. Make no mistake about it - Lilly Shapiro will go down as a NJ legend!!!!
She represented everything that makes NJ T&F and XC so great over her unforgettable career, and she should be remembered just as much for her humility and her team first attitude as she is for her fast times and record breaking performances!