The top guns in Union County showed off their mighty firepower with sizzling performances, several athletes repeated as champions, there was a stunning and thrilling upset victory, and one meet record went down on an electrifying opening day at the Union County Championships on Tuesday at the Milt Campbell Track and Field Complex in Plainfield

The second and final day of competition is scheduled to begin on Wednesday at 4 p.m.
Let's get this rolling with the fastest girls 1,600-meter race in meet history!
Peyton Hollis of Union Catholic continued her red hot sophomore season when she pulled away from a game Lillian Murphy of Oak Knoll over the final 200 meters to smash the meet record in the girls 1,600-meter run with a time in 4:53.15. The UPenn-bound Murphy was second with a six second PR of 4:58.29 as both runners went well under the meet record of 5:01.39 set in 2019 by Jerika Lufrano of Union Catholic.
Hollis, coming off a Union County record and NJ No. 1 time of 4:49.88 in mile last Friday, said she felt confident she could get the record after such a strong race last week. Hear her talk about her performance in this video interview -

Hollis was one of four winners for the Union Catholic girls, who racked up 92 points as the Vikings took a 38.50 lead over Scotch Plains-Fanwood. UC is seeking a seventh straight title.

The three other champions for UC were Asydiah Pray-Brown, who won her first county title by running 63.96 to capture the 400 hurdles, Jada Mia Puryear, who repeated as champion in the shot put (40-9.50), and Daniela Peralta, who captured the pole vault for the second straight year by clearing 10-0.

JACKSON AND NWACHUKU BURN UP THE TRACK

In other girls highlights, Julia Jackson NJ of Scotch Plains-Fanwood and Christiana Nwachuku of Kent Place dominated the sprints.

Senior Catherine Goger of Brearley scored the biggest win of her career by placing first in the javelin with a PR of 116- 9. 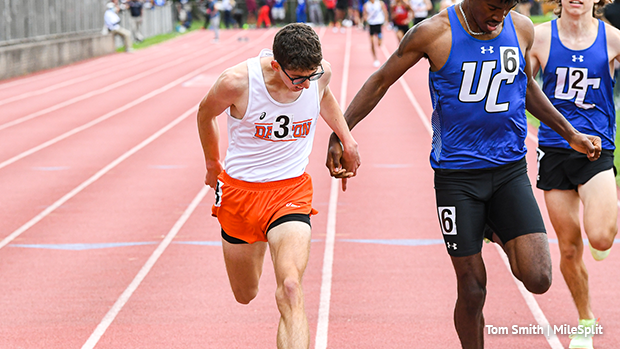 The most dramatic finish of the day came in the boys 1,600 where junior Colin Riley of Dayton made a huge move over the final 150 meters to reel in four runners and outlean Myles Plummer of Union Catholic to finish first in a blanket finish in 4:15.15. In a race that saw the top five finishers separated by just .67 and six guys under 4:20, Plummer was second in 4:15.20, defending champion and Union County record holder Shane Brosnan of Union Catholic was third in 4:15.55, Union Catholic's Jimmy Wischusen was fourth in 4:15.61, Micah Lawson of Rahway placed fifth in 4:15.82, and Lucas Reguinho of Elizabeth finished sixth in 4:19.83.

"All those guys made a big push with 200 to go and gapped me,'' said Riley. "But then with 150 to go, I decided I had to do something and just went for it. We do 4x150's in practice all the time, and it paid off today. I was still back a bit with 50 meters to go and then just gave it all I had and was able to get the win. It's pretty crazy to be standing here as the winner. I didn't expect this at all. I'm coming back for the 3,200 tomorrow, and some of those guys will too, so I know it's going to probably take something under 9:10 to win. I'm looking forward to seeing what I can do.''

Elizabeth's Greg McQueen was his sizzling self.

The Rutgers-bound star repeated as champion in the 100m dash with a PR and NJ. No 7 time of 10.72, and then came back to win his second straight 400 title in 48.58. McQueen will aim for the sprint triple for the second straight on Wednesday when he defends his 200 title.

Senior Brice Facey of Gov. Livingston cleared a personal best 6-4 to win the high jump, and also finished fifth in the long jump by soaring a personal best 21-1. Facey, who plays basketball in the winter, sure has come a long way in a short time. He came into this season with PR's of 5-10 and 20-3.75.
Union Catholic picked up wins from Nick Givan and Noah Cooper to help the defending champion Vikings take a 50-39 lead over Elizabeth.
The Georgetown-bound Givan won the 400 hurdles for the second straight year with a PR and NJ No. 5 time of 53.73, and was second in the 400 in 49.24. Cooper, a freshman, soared an NJ No. 11 22-3.50 to win the long jump.
Junior Owen Paul of Westfield unloaded a huge PR of 156-7 to win the discus. His previous best was a 140-2 at the county relay championships two weeks ago.
Tweets by NJMileSplit