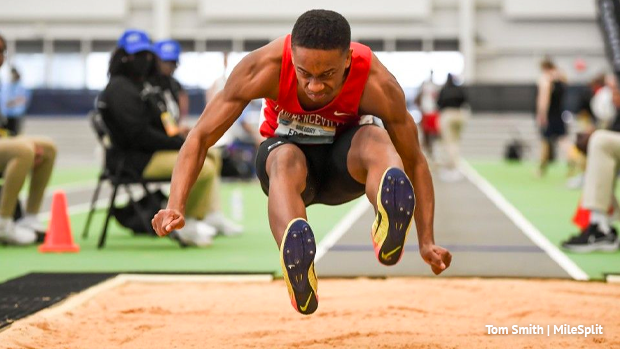 Greg Foster sprung out of the sand and threw his hands on his heads in disbelief.

The senior at Lawrenceville knew he had just jumped further than he had ever gone before, and he waited anxiously for the measurement to be announced at Saturday's Nike National Championships at Ocean Breeze on Staten Island.

About 30 seconds later, Foster's official long jump mark on his final attempt was announced. It was 25-4.50, which sent the crowd into a frenzy and caused Foster to jump up and down in jubilation.

"I knew when I landed that it was a really big jump,'' said Foster, whose previous best of 24-8 came at the Mercer County Championships in January. "I knew I had l already won before that jump, so I had nothing to lose and just went for it, and everything just came together. I knew I had a 25 in me, and it was just an amazing feeling to finally do it.''

Foster's 25-4.50 is just an inch behind the NJ indoor record of 25-5.50 set by the legendary Carl Lewis of Willingboro at the 1979 Easterns at Princeton University.

"To be up there with someone like Carl Lewis, who is the greatest of all-time, is an honor,'' said Foster, who lives in Lumberton. "It means all the work is paying off.''

Foster's electrifying performance was part of an amazing triple by the Princeton University-bound star.

On Friday, he won the Nike National title in the triple jump when he soared 49-9.25 on his final attempt to rally for the victory and break the NJ state record.

And after his LJ win on Saturday, he nearly won the 60m hurdles, placing third in 8.01, just .02 behind the winner, Jadyn Marshall of California.