While depth and balance are big factors in determining the team champs at the sectional level, more often than not you need to have star power to win State Group Championships in track and field.
That was evident once again on Saturday when some of the state's biggest stars rose to the occasion to carry their teams to titles at the NJSIAA Groups 2-3 Championships on Saturday at the Bennett Center in Toms River.
In the girls Group 3 competition, Julia Jackson, the Meet of Champions winner in the 400 last spring, finished first in two races, broke a meet record, and anchored the winning relay to fuel the Scotch Plains-Fanwood girls to their first state indoor title ever, 53-28 over runner-up Colts Neck. SPF, which finished second last week to North Hunterdon in North Jersey, Sec. 2, received all of its points from four athletes. But that's all you need when you have that star power! More on that later. Another example of that star power occurred in Group 2 where All-Stater Christina Allen won the 800 (2:17.27) and 1,600 in 5:04.54 to score 20 of River Dell's 29 points as the Hawks edged co-runners-up Haddonfield and Rumson, 29-26. River Dell only needed points from three athletes to win its second title. River Dell won its first championship in 2016.
In the boys Group 2 competition, the Delsea boys used a remarkable 1-2-3 finish in the shot put, a huge victory from Andrew Littlehales, and received PR's from all six of their scoring athletes en route to a 44-36 over Hamilton North to capture the Group 2 title. Delsea, like the Scotch Plains-Fanwood girls, placed second at the sectional championships, but because of its firepower the Crusaders won their fourth state championship. 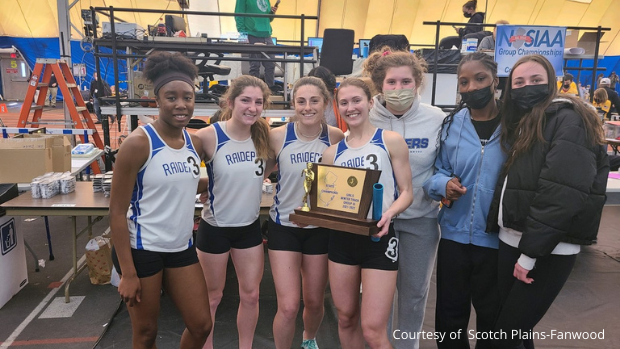 As mentioned earlier, it only took four girls to score all 53 points for the Scotch Plains-Fanwood girls on their march to the Group 3 championship.

The Duke-bound Jackson was the catalyst for the Raiders.

Angelina Perez of Lakeland blasted one of the greatest performances in state history in the Group 2 3,200, dropping a meet record 10:21.29, which is No. 5 in state indoor history, and No. 5 in the nation this season. The University of Florida-bound Perez smashed the overall meet record (All Groups combined) of 10:30.25 set in 2006 by Brittany Sedberry of
Ocean City.

Speaking of stars,  Shamali Whittle of Hamilton North lit up the track!!!

Bryce Tucker was his scintillating-self for Pennsauken.