Results | Videos
Haddonfield broke the meet record for the most points scored by a girls team, and the Deptford boys edged Rumson for the boys title at Monday's NJSIAA Group 2 Relay Championships at the Bennett Center in Toms River.

The team titles by Haddonfield and Deptford completed a remarkable run of dominance at the state relays by South Jersey, which captured seven of the eight public school team championships. The other five titles for SJ came from the  Cherokee girls and Kingsway boys in Group 4, the Pennsauken boys and Winslow girls in Group 3, and the Willingboro boys in Group 1.

Monday's state relay finale saw the Haddonfield girls capture its second straight title and eighth overall by racking up 63 points to take down the girls Group 2 record of 62 points that had stood since Notre Dame tallied that total at the 1992 meet at Jadwin Gym in Princeton.

Haddonfield was just too balanced and deep for any team to challenge! The Dawgs placed third or better in eight of the nine events and had an astounding 18 athletes score on its march to history!!!

In the DMR, Audrey Naticchia (1200), Thea Spellmeyer (400), Jess Goode (800), and Helene Usher (1600) teamed up to finish first. The winning 4x800 consisted of Libby DeMichele, Riley Slootsky, Stella Stolarick, and Goode. DeMichele (7-0) also combined with Fiona Mamas (8-0) to tie for second in the vault.
The members of Haddonfield's victorious shuttle hurdle crew were Livsey Kegler, Grace Malcarney, Sydney Bonner, and Audrey Adams. Malcarney also cleared 4-8 when she combined with Franchesca Richards (4-10) to place third in the high jump, and she ran the 400 leg on the SMR. Kegler was also part of the 4x200 and ran a 200 leg on the SMR, while Naticchia anchored the SMR, Spellmeyer ran a leg on the 4x400, and Ava Peifer ran on the 4x200, and 4x400 for the Dawgs.
The other four girls who scored for Haddonfield were Maya Carey (4x400), Chloe Gwaku, Maeve Hurley (4x200), and Juliet Walls (4x200).
Haddonfield also received career best performances from Moira Geiger and Clare Malcarney, who each unloaded personal bests in the shot put. 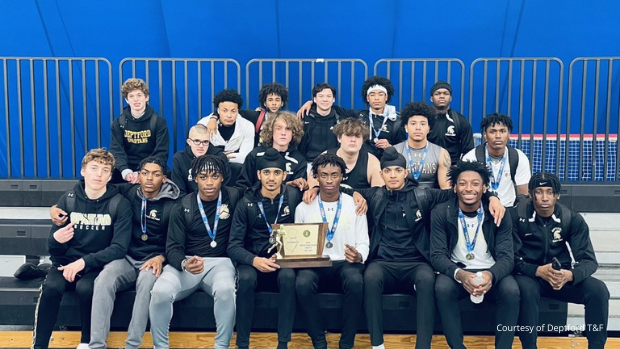 The Deptford boys came through in the clutch in the final event to nip Rumson, 34-32.50, to win its second state relay title. Deptford won its first state relay championship in 2019.

Deptford held a 32-22.50 lead over Rumson heading into the meet-concluding 4x400, so that meant that all Deptford had to do to nail down the title was to finish anywhere in the top six. Rumson won the 4x400 in 3:36.61 to earn 10 points to finish the meet with 32 points. Deptford did what it needed to do as Lathan Brown, Miles Williams, Christian Berry, and Abu Jabbie combined to place fifth in 3:41.57 to pick up two points to win the championship by 1.50 points.

Brown, Williams, and Berry, who ran on the 4x400, also  teamed up with Lloyd Boggs to win the 4x200 for Deptford. Singh, Brown, Manny Perdue, and George Rodgers ran on the shuttles, and Brown, Boggs, Williams, and Carter shared the baton in the SMR.