Angelina Perez got the redemption she had been waiting for in record-breaking fashion, and Cherokee captured its first title with a thrilling and stunning performance at Saturday's 49th NJSIAA Meet of Champions on Saturday at Holmdel Park.

Perez, the indefatigable senior at Lakeland, vowed ever since she saw her huge lead in the 3,200m at the M of C last June slip away, that she would come back this season and prove that she is the best distance runner in the state.

She did much more than that.

Perez blasted out to a huge lead, just like she's done in every race during her undefeated season, and didn't allow anyone to challenge her as she just kept hammering the pace over the rugged 3.1-mile layout before stopping the clock at 17:09, which shattered the meet record, and solidifies her place as one of  NJ's Legends of the Fall!

Perez had to be on top of her game to win because senior Lilly Shapiro of Colts Neck dropped a huge 24 second PR to equal the former meet record and finish second in 17:35, which ties her with Smith for No. 4 on Holmdel's all-time NJ list. Metuchen senior Mary Malague also got under 18, placing third in 17:56. The red hot pace produced a parade of PR's, and an astounding 19 runners broke 19 minutes!

The University of Florida-bound Perez said she learned a valuable lesson from the M of C 3,200 last June when she was chasing a time and ran out of gas late in the race. She got passed by two runners right at the line, and wound up third.

"Today my goal was all just about winning my first Meet of Champions title in cross-country,'' said Perez. "The 3200 at the Meet of Champions was very disappointing for me, I was too worried about running for time in that race. So I learned from that, and just ran to run. I did a lot of thinking after that 3200, and I was determined to work even harder and prove to myself that I could comeback this season and be the best runner in the state. This title means so much to me.''

Perez, who also won a Meet of Champions indoor in the 3,200 in 2020, said she felt the key to winning the race was to get a big gap on the field as soon as she could.

"I know how fast Lilly Shapiro is finishing, so I didn't want her to be close to be near the end of the race,'' said Perez. "So the strong part of race is going out hard and keeping a fast pace. That's what's always worked for me, so I stuck with that and it worked out.''

The season Perez is having is without a doubt one of the greatest in state history. She also broke the course records at Darlington Park (16:44), and Garret Mountain (16:54) this fall. She said it's an honor to be called one of the best XC runners in state history.

"That means a lot to me ,'' said Perez, who will be running in the East Bay Northeast Regional at Van Cortlandt Park in N.Y. next Saturday and has a very good chance to join Smith (1983) as NJ's only girls to win the East Bay (formerly Foot Locker) National XC title. ''I guess I should be remembered as someone who tried a new sport and worked really hard at it to be the best I could be. Everyone should try new things because you just never know what can happen.''

The North Carolina-bound Shapiro, who won the Group 3 race in 17:59 last week, was ecstatic with her performance.

"I knew I could run faster than i did last week, but I never thought I'd go 17:35,'' she said. "When I saw the clock as I was getting closer to the finish, I couldn't believe it.''

Shapiro, who led Colts Neck to a third-place finish, praised Perez and said her fast pace and Malague's presence pushed to run faster.

"Angelina is such an unbelievable runner, and I have so much respect for her,'' said Shapiro, wo won the 800 at the Meet of Champions last spring. "I knew she would go out real fast, and I did also. But when I got to the mile, she was out of sight. But I knew that could happen, so I just focused on my race, and I had the girl from Metuchen with me, so she made me work hard.''

"When I started running cross-country as a sophomore I was really just a track runner, so I never really thought anything like this could ever happen,'' said Shapiro, who will also be racing at the East Bay Northeast Regional. "It's just so amazing to think how far I've come as a cross-country runner.''

CHEROKEE DOES IT AGAIN

For the second time in a week, Cherokee dug down deep and proved everyone wrong and beat the No. 1 team in the state!!!

This time, the No. 3 ranked Chiefs threw down several huge Holmdel PR's to outscore runner-up No. 4 ranked Ridgewood, 117-126, for its first ever title. This is the third straight time that Ridgewood has finished second. No. 1 Colts Neck was third with 147. No. 5 North Hunterdon finished fourth with 149, and No. 2 Haddonfield, running without the injured Sabrina Miller, was fifth 179.

Cherokee, which finished sixth in 2010 and eighth in 2004 in its only other appearances at the M of C,  is the first South Jersey girls team to win since Shawnee won a second straight title in 2003.

Despite defeating then No. 1 ranked Ridgewood by two points to win its first Group 4 title ever last week, Cherokee came into this race as an underdog because it was third in the team merge last week, well behind both Haddonfield and Colts Neck.

But Cherokee stunned the field by dropping its average from 20:01 last week all the way down to a South Jersey course record 19:23.

A huge key for the Chiefs was that its fifth runner finished ahead of Ridgewood's No. 4 runner to seal the deal.

Cherokee trailed Ridgewood, 46-54, after each team had three runner across, but Parkinson finished 13 places ahead Ridgewood's No. 4, and Megan Niglio finished two spots ahead of Ridgewood's No. 4 to complete the dramatic comeback victory.

"I still can't even process what just happened,'' said Clifford. "This is just so unbelievable.''

Cherokee coach Mark Jarvis, who missed the meet due to illness, was obviously ecstatic with how his team ran, and was stunned with how much time his girls dropped.

"My No. 2 (Kelsey Niglio) dropped 46 seconds off her Holmdel best, my No. 3 (O'Day) dropped 55, and my No. 5 (Megan Niglio) dropped 43 seconds off her Holmdel PR,'' said Jarvis. "The whole team just stepped up to the challenge this week. After last week's performance, it can often be hard to top that. With so many runners on our team running the fastest time they had ever run at Holmdel, we knew this would be a challenge. The ultimate goal was top three, making the podium would have been a huge accomplishment, but what if..?? That is what I challenged them with. I was unfortunately unable to be there, and after the girls found out about this on Friday, the new battle cry was to run this race for me.''

Jarvis said he knew before the season started that this team was just on a higher level than any other team in Cherokee history.

"I told them that at the start of the season, a fellow coach was asking me how the team looked this year, and without hesitation I said this is the best team I had ever coached,'' said Jarvis. "What shocked me is how easily I said that. The girls have certainly lived up to that and it all came together when we needed it to. None of this would have been possible without Dave Petruzzi, Steve Shaklee, Jeff Thompson, and the parents that have supported us this year. This victory was not a result of te workouts or training we have done this year, but rather all the practices at Holmdel, Dream Park and RV Sports complex that they did without coaches being there. It was the parents that helped make that happen.'' 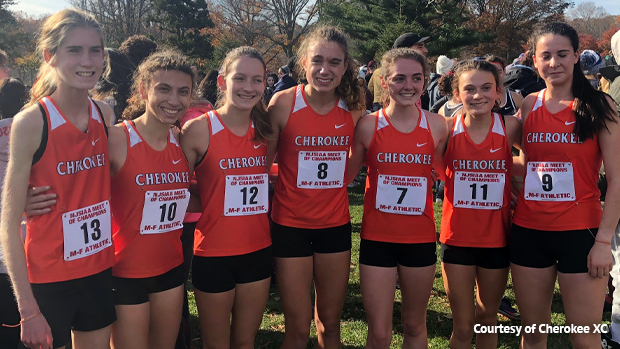