The NJ XC Meet of Champions, one of the greatest high school sporting events there is, is back!

After being knocked out by Covid last year, the 49th edition of the Super Bowl of NJ XC is set for Saturday at Holmdel Park, and it has the potential to be one of the most dramatic and thrilling M of C's of all-time.

The girls race is scheduled for 11 a.m., and the boys race will follow at 11:45 a.m. And yes, parking is permitted at Holmdel Park. The battle for the boys team title could be an epic showdown between NJ #1/US#10 Union Catholic and NJ# 2/US#12 Christian Brothers Academy, who will clash for the second time in just four days.  But don't fall asleep on No. 3 Haddonfield and No. 4 Ridge, who are capable of pulling off a surprise if they can come up with their best races of the season.

Union Catholic, seeking its first title, is attempting to join Westfield as the only Union County teams to ever win an M of C title. The Blue Devils captured the title in 1976.

In order to come out on top, Union Catholic will have to defeat CBA, the greatest program in state history, for the second time this week. CBA has won the last three titles, nine of the last 10, and owns the state record with 24 championships. CBA's 24 M of C titles is one more than the rest of the entire state has combined to win (23). Note-There was no team scoring for boys in 1972, the first year the meet was held.

UC comes into this race with plenty of confidence after scoring a 32-43 victory over CBA at Tuesday's Non-Public A Championships as the Vikings received Holmdel PR's from all seven runners and had a five-man average of 16:13,  the eighth fastest in course history. UC has the state's best frontal attack in senior Shane Brosnan, sophomore Jimmy Wischusen, and senior Myles Plummer, and a strong 4-5 in juniors Caudell Cajuste and Ryan Cichocki.

But UC may have to run even faster to win because CBA should run much better than it did on Tuesday when they suffered some misfortune when freshman Joe Barrett, projected to be CBA's No. 3 man, lost a shoe just before the mile mark and fell way back as a result, eventually dropping out to avoid injury.

If you throw Barrett, who set the CBA freshman record at Holmdel with a 16:39 at the Monmouth County Championships, into the team merge with a time in the 16:25-16:30 range, then this race comes out to be very close on a paper between UC and CBA. Haddonfield, coming off a fourth straight Group 2 title on Tuesday, is seeking its second title ever. Haddonfield won in 2001 when they had three runners break 16, the first time in course history that a team had three guys go sub 16 in the same race. CBA also accomplished that feat in 2013 when the Colts averaged a mind-blowing course record 15:52!!!

The Dawgs, led by Group 2 champ Seth Clevenger (15:51), averaged 16:28 in its Group 2 victory. If the Dawgs can get their 4-5 guys to make some decent drops, Haddonfield could make a run at winning.

Another thing to keep in mind is that UC, CBA, and Haddonfield all raced hard on Tuesday after their races were postponed last Saturday, and all the other top contending teams haven't raced since last Saturday? Will that be a factor? CAN ANYONE STOP LANGON

Marco Langon of Bridgewater-Raritan has been unstoppable and unbeatable all season, and he finds himself one step away from a goal he set for himself three years ago when he was a freshman.

The Villanova-bound Langon, who dropped a 4:52 last 1.1 to win the Group 4 race in 15:38, is undefeated this fall and owns the state's top time at Holmdel this season of 15:30, which he ran at the Shore Coaches Invitational. That's 15 seconds faster than the next fastest runner, Brosnan (15:45 to win Non-Public A).

In his two races at Holmdel, Langon has put both races away by owning the woods. Will that happen again? Will someone be able to hang with Langon once they make the turn after passing the tennis courts?

Another big question is will someone take the race out fast, and set up the possibility for some red hot times, maybe even a winning time close to 15:20 or maybe even under?

Who can challenge Langon?

There are seven other runners in this race who have broken 16 at Holmdel this season.

Brosnan has proven to be very strong over the second half of his races, even when the early pace is quick. Clevenger had a lot more run in when he won the Group 2 title, and Fortuna ran his 15:54 after blasting a 5:07 first mile.

The Georgetown-bound Barna, although he's lost to Langon the last two weeks, has the potential to run much faster than his 15:50 Holmdel PR. Don't forget that he ran a course record 14:41 at Ocean County Park, and a 12:04.8 at Van Cortlandt this season. And Barna did come up with a big upset win last spring when he won the 3,200 at the Meet of Champions after losing to Jackson Braddock of Southern in the Group 4 race. 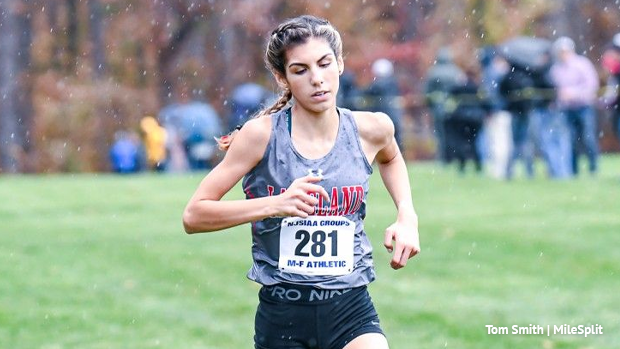 HOW LOW WILL PEREZ GO

With no disrespect to anyone else in the girls race, Angelina Perez of Lakeland is just running on a whole different level than anyone else in the state, and she may just be the best high school XC runner in the nation right now.

The University of Florida-bound Perez solidified her status as the No. 3 ranked runner in MileSplit's Top 50 when she burned a NJ course record 17:07, to win the Group 2 race by nearly a minute. That broke the NJ Holmdel course record of 17:21 set last year by Charlotte Bednar of Lawrenceville.

The meet record of 17:35 set in 1983 by Janet Smith of J.P. Stevens, the only girl in state history to win the Foot Locker National XC title, should be obliterated. So the question remains? Just how low will Perez go?

The indefatigable Perez, who is having one of the greatest seasons in state history, said the Holmdel record of 16:21 set by Katelyn Tuohy of North Rockland, N.Y. at the 2018 Shore Coaches Invitational, is probably out of reach, but going sub 17 is something she will be chasing.

Perez, seeking to become the first winner from Passaic County since Lindsay Van Alstine of Hawthorne Christian in 2001, comes into the race having run 52 seconds faster than anyone else at Holmdel Park. 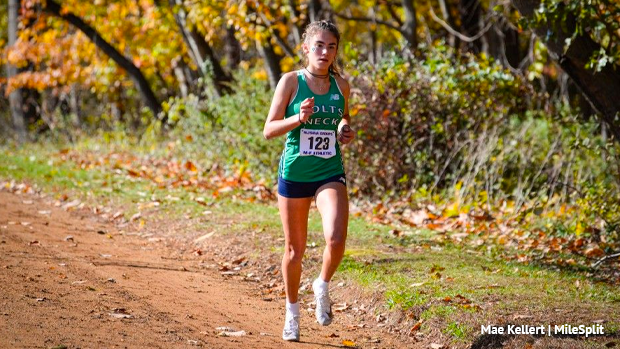 COULD IT BE SHAPIRO'S RACE?

Lilly Shapiro of Colts Neck leads the group of runners who will attempt to stay with Perez and spring what would be a monumental upset.

The North Carolina-bound Shapiro looked very strong and smooth when she ran her Holmdel PR of 17:59 last week to win the Group 3 championship. Shapiro hammered the first two miles last week to simulate what racing Perez might be like, and then backed off over the final mile.

It remains to be seen if Shapiro or anyone else will be able handle Perez's aggressive front-running, and challenge her. But one thing is for sure, Shapiro has the talent and the heart to be in the hunt.

The next fastest runners are Metuchen's Mary Malague, second to Perez in Group 2 last week in 18:06, Non-Public A champ Cate DeSousa of Red Bank Catholic (18:26 Holmdel PR), Non-Public B winner Tilly O'Connor of St. Rose (18:40), freshman Liliah Gordon of Northern Burlington (18:44,), and Group 4 winner Remy Dubac of Clifton (18:45). Other runners who should be in the mix for a top 10 spot are Cassidy Roop of North Hunterdon, and Lara Cota of Summit, who each ran 18:47 at the Group Championships. Who will win the girls team title?

Colts Neck, the Group 3 champion, is chasing its second title (the Cougars also won in 2006). Haddonfield is seeking its first title, and is trying to become just the second South Jersey program to ever win (Shawnee has won four-1991, '97, '02, '03). Cherokee, which stunned then No. 1 Ridgewood to win the Group 4 title last week, is trying to win for the first time, and Ridgewood, No. 1 all season until falling to Cherokee last week, has won two M of C titles (1992, 97).

Although Colts Neck finished behind Haddonfield in the Group Team merge, 221.5-265, Colts Neck held out Ava Wilmot, their usual No. 3 runner. Wilmot is  fine and will be back on the starting line for Colts Neck on Saturday.

Without Wilmot, Colts Neck still averaged 19:41 last week, and the Cougars seem poised to win for the first time in 15 years.

Look out for Haddonfield!!

Despite losing four of its top five runners to graduation off a team that finished last year No. 1 in the state, the Dawgs are in great position to win.

Haddonfield's strength is its remarkably tight pack, which had a 1-5 spread of just 31 seconds when it won the Group 2 title. Haddonfield's top five at the Group 2 meet, who averaged 19:52, were sophomore Anne Earp, junior Sabrina Miller, senior Jess Goode, sophomore Audrey Naticchia, and junior Helene Usher.

With Haddonfield in contention to win both the boys and girls titles, you might be wondering if a team has ever swept team titles at the Meet of Champions? Yes! Bernards (1982) and North Hunterdon (1983) pulled off the broom job.

As for Cherokee and Ridgewood, both teams have a shot to win as well.

Cherokee averaged 20:01 and ran its best race of the season to edge Ridgewood in Group 4, 84-86, to capture its first State Group title ever. Non off race t many people felt Cherokee could win Group 4, so don't count out the the hungry pack of Chiefs. Maybe they can pull off another shocker.

Ridgewood's normally tight pack was too spread out in the Group 4 race, but the Marrons definitely have the talent to rebound and it would not be surprising to seem them put together a winning performance.