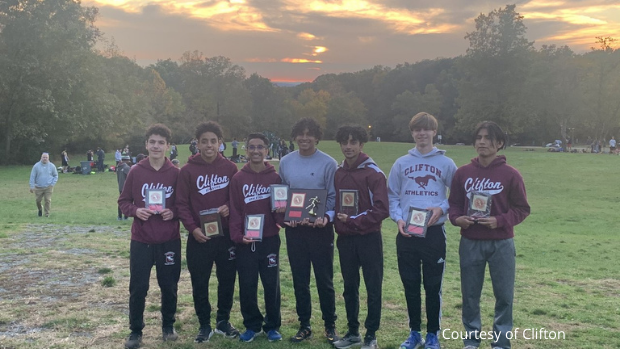 Stunning and historic victories, upsets, and another masterpiece by Lakeland's Angelina Perez highlighted an unforgettable day of racing at Saturday's North Jersey, Section 1 Championships at Garret Mountain in Woodland Park.

One of the biggest upsets in the state on Sectional Saturday was delivered by the Clifton boys!

Led by senior Jacob Heredia's blazing victory in 15:40, tied for No. 9 in course history, the Mustangs stunned NJ #16 Ridgewood, 46-59, to end Ridgewood 's run of 11 straight titles! This is Clifton's first title since 1987 when it captured its only other sectional trophy. Clifton also became the first Passaic County team to win the boys Group 4 sectional title since New Milford in 2001.

Meanwhile, the biggest news on the girls side was Perez's mind-blowing course record of 16:54, and Park Ridge/Emerson's upset in Group 1 to capture it first ever title.

More on the girls after we dig deeper into Clifton's historic triumph.

Clifton knew it had to run its best race of the season to dethrone Ridgewood, and they did even more than that. The Mustangs responded by throwing down the fastest team performance by a Passaic County team in Garret Mountain history with its average of 17:04!

Sure, Heredia's 15:40 obviously has a lot to do with that average, but several other Mustangs came up huge with course PR's to make this championship possible. Another shocking result came in the girls Group 1 race when the combined Park Ridge/Emerson pack took down Mountain Lakes in a  thriller, 48-50, to capture its first sectional crown ever!

Individually in Group 1, Kinnelon sophomore Grace Mouglian scored the biggest win of her career so far by running 20:37 to win by one second over Danielle Tilp of Cresskill.

The biggest individual highlight of the meet of course came from Perez, whose 16:54 in the Group 2 race broke the course record of 17:05 that she set at Passaic County Championships on Oct. 28. It's the fourth time Perez has broke the CR at Garret during her legendary career.

The University of Florida-bound Perez led her Lakeland squad to its second straight Group 2 title as the Lancers ran away with the championship, 31-101 over Indian Hills. Lakeland, ranked No. 5 in the state, put its seven runners in the top 19.

The 16:54 at Garret means that Perez has a great shot at taking down the N.J. course record at Holmdel Park (17:21 by Charlotte Bednar of Lawrenceville last year) when she races in the State Group 2 Championships next week at Holmdel. Is sub 17 at Holmdel possible? Perez is so fit right now that she could make a run at it! Stay tuned!!

The Group 4 girls race went as expected as Ridgewood, the No. 1 team in the state, packed up and rolled to a 21-75 victory over Essex County champion Montclair, and Clifton junior Remy Dubac won the race in 18:58 to continue her great family legacy. Dubac's older sister, Mia, won the sectional title a year ago

Ridgewood, which dominated the race by going 2-3-4-5-7 and averaging 20:12, won for the sixth time in eight years and extended its sectional record to 26 titles. In the Group 3 girls race, No. 19 ranked Old Tappan crammed four runners in the top eight and finally got past its nemesis Northern Highlands, 48-65, to win its first title since 2002 and end No. 15 Northern Highland's streak of five in a row. Ramapo junior Brianna Braver ran 19:21 to win her second straight title by 33 seconds over Old Tappan junior Kristen Johnson (19:54).

In the boys competition, Demarest scored a dramatic 78-81 victory over Lakeland for its first title in four years, and Lakeland junior Owen Horevay ran 16:49 to win the race.

Lakeland had the edge up front with a 1-5 finish, but Demarest's tighter pack overcame Lakeland frontal attack to rally for the victory. Demarest was trailing, 44-50, after each team had four runners across, but Demarest junior Harrison White came up with a clutch 28th place in 18:37, nine spots ahead of Lakeland's No. 5 runner to secure the title.

In boys Group 3 race, Northern Highlands put six runners across the line before any other team had four finishers on the way to an 84-133-133 victory over Old Tappan and Wayne Valley. Its the first title since 1991 for Northern Highlands. Junior Ryan Melendez of Mount Olive won the race in 16:50, three seconds ahead of Ramapo senior Alex Horgan. The boys Group 1 race was dominated by Kinnelon, which jammed three runners in the top five and rolled to its second straight title, 48-104 over Mountain Lakes. Senior Aidan Carroll of Glen Rock, the Group 2 sectional champ last year ran 16:49 to win by 43 seconds over Kinnelon senior Braeden Carroll.