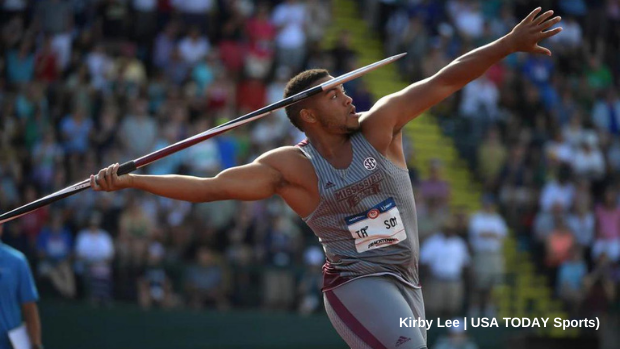 New Jersey's Curtis Thompson put together one of the greatest javelin performances in meet history, capped off with 271-7 bomb on his final attempt as he captured the event in dominating fashion at the U.S. Olympic Trials on Monday night at Hayward Field in Eugene, Oregon.

Thompson, a 2014 graduate of Florence High School, is the first New Jersey male athlete to finish first at the Olympic Trials since Bobby Smith (Hopatcong High School/Monmouth University) won the javelin in 1998.

Thompson has now captured three national javelin titles in his career. He also won the NCAA title for Mississippi State in 2016, and he won the 2018 USATF Championship.    .

Despite the victory, Thompson didn't automatically qualify for the U.S. Olympic Team that will compete in Tokyo next month because he hasn't hit the Olympic Standard of 278-10, which no one else in the U.S. has achieved either. That's what prevented Smith from making the Olympic Team in 2008.

But Thompson will very likely earn a spot on the Olympic team based on a complicated ranking system used by the IAAF.

HE HAS DONE IT! CURTIS THOMPSON!

In a nutshell, if Thompson hits the standard of 278-10 or is inside the top 32 in the IAAF's rankings on June 29, which is deadline to hit the Olympic Standard, then he will be on the Olympic Team. Right now, Thompson's 271-7 places him No. 18 in the World this season. But the IAAF rankings include other criteria that just isn't clearly explained. I told you it was complicated!

Back to Thompson's amazing performance.

Thompson opened up the competition with a throw of 263-7 on his first attempt, which was more than enough to win the event. He went on to record the four best throws of the competition and he finished with a an average of 260-3 on his six throws. Michael Shuey of the New York Athletic Club was the only thrower who got close to Thompson when he unloaded his second place toss of 260-0 on his third attempt, which put him just three feet, seven inches behind Thompson heading into the final three rounds.

Shuey fouled on his fourth and fifth throws before throwing 258-2 on his final attempt.

So with the victory already clinched, Thompson, with nothing to lose on his final attempt, put the finishing touches on his masterful performance by delivering the 271-7, No. 3 in meet history, and just off his PR of 271-11 that he threw to place second at the 2016 Olympic Trials.

Thompson's 271-11 at 2016 Olympic Trials was short of the Olympic Standard by just five inches, so he was left off the team that competed in Rio.

But this time around it looks like Thompson, thanks to his walk-off bomb tonight, will finally get to wear a USA uniform on the biggest stage of them all.