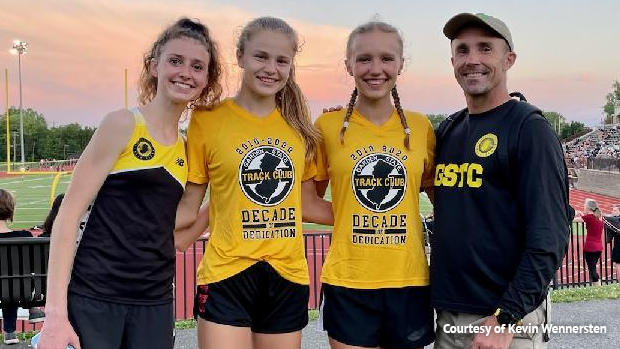 Camryn Wennersten made state history and made a strong run at the state record in the mile on Friday night when she  dropped a red-hot 4:43.83 to move into No. 4 on the state's all-time list at the John Hay Pennsylvania Distance Festival at West Chester Henderson High.

Wennersten, a junior from Ridgewood who runs for the Garden State Track Club, was also auto-timed at 1600m with a 4:42.07, which is places her No. 6 on NJ's All-Time list. Wennersten finished first among girls in the mixed gender race.

Wennersten's remarkable performance makes her the first girl in NJ history to run under 4:45 for the mile and under 2:08 in the 800m. Last week, she lit up the track when she threw down a 2:07.68, No. 13 in state history, to finish first in the two-lapper at the Dash and Splash Holiday Classic at the University of West Virginia in Morgantown.

The only runners in state history to run faster than Wennersten for the full mile without 1600m conversions are Danielle Tauro of Southern Regional, who ran the state record of 4:39.25 to finish first at the 2007 Nike National Championships, Olympian Erin Donohue of Haddonfield, who ran 4:42.96 at the 2001 Adidas National Championships, and Michelle Rowen of Washington Township (4:43.3 in 1982).