On Friday, December 11th, the NJSIAA released their spring sports dates as well as the Season 4 Return to Play memo to member schools; those documents can be found below in the press release.

In the Return to Play Season 4 plan it is stated, "NJSIAA will strive to host all levels of post-season play that have traditionally been hosted."

According to the report, tournament information will be released no later than February 15th. Out of state competition continues to be restricted by the DOH's and Governor's orders and the NJSIAA reserves the right to impose further restrictions.

In keeping with its pledge to providing as complete a spring season as possible, the NJSIAA's schedule for the spring of 2021 offers the opportunity for the same number of games to be played as during a conventional season, while also providing the opportunity for statewide championships. Start dates were pushed back to minimize overlap with sports being played during Season 2A and Season 3. The integrity of the spring sports season, however, remains intact.

"Minimizing overlap and avoiding direct conflicts between sports has always been a top priority of the Sports Advisory Task Force," said Dave Frazier, chair of the task force. "After the loss of the spring 2020 season, we want to ensure every student-athlete has the opportunity to participate in each sport they would have during a normal year."

The following is the spring 2021 scholastic sports calendar: 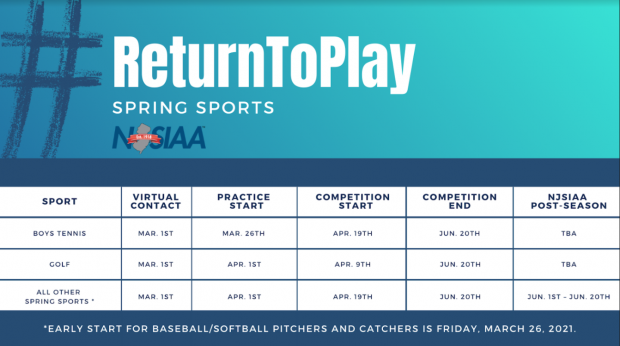 Tournament information for all spring sports will be available no later than February 15.

"Multi-sport athletes should be celebrated, and not made to choose between two sports that they love," said Colleen Maguire, COO of the NJSIAA. "As a result of indoor practices and competition being suspended per Executive Order No. 204, some overlap between seasons is unavoidable. But based on our latest plan, student-athletes will still have the opportunity to compete during all seasons."

Maguire also noted that participation in any in-season sport must take priority over virtual workouts or virtual meetings related to an out-of-season sport.

Based on orders from the New Jersey Department of Health and the governor's office, out-of-state competition continues to be restricted. NJSIAA will continue to keep member schools updated on the state's guidance, while reserving the right to impose further restrictions.