Morris Hills boys took the win at the All Hallows Invitational on Friday night in New York.

This week's coverage will be added below including highlights, recaps, videos, interviews, stories and more.

Oliver Alder had the fastest time of the meet with his Division 3 winning 15:41. His run led Cherry Hill East to the race win as well as the overall merge lead scoring 83.5 in the combined results averaging 16:29.

On the girls side Kate Rathman of Cherokee won the Division 3 race with a meet leading 18:46, the only one under 19 minutes. Her Cherokee squad finished a close second in that race with Cherry Hill East earning the win by just two points 61 to 63! These two also led the combined merge.

Liam Murphy and Charlotte Bednar led hte way for NJ, with Murphy recording the fastest time of the meet at 12:15.2 and Bednar ranked fourth in the merge with her time of 14:01.2 NJ course record.

CBA and Middletown South both ranked third in the overall merge for New Jersey. Check out the full recaps and merge reports below.

The Morris Hills boys won their race with a 16 point run finishing 1-2-3-4-6 (10-13)! They were led by Domenick Wallace out front at 13:31.7 for the 2.5 mile race. Albin Mullan, Akshay Rau, Kerrn Reehal, Steven Esmeraldino all part of that winning top five. Their freshmen squad also placed well running second as a team in their division. Teaneck was fourth in the varsity boys race.

On the girls side Teaneck saw Grace McCullough run second overall with a 2.5 mile time of 17:00.5. 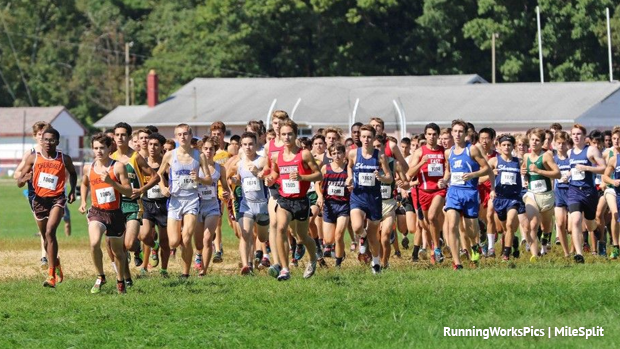