When TJ Harkins of Immaculata and Laura Baeyens of Watchung Hills were pounding out their summer mileage, they were both fueled to increase the quantity and quality of their training runs by a desire to run some big PR's and contend for some major titles this season.

It hasn't taken long for that hard work and determination to pay off.

The two Somerset County stars displayed their high fitness levels on Saturday by throwing down personal best performances and running away with the Senior Division titles with the fastest times of the day in steamy conditions at the 40th NJCTC Bernie Magee Class Meet on Greystone's course at Central Park in Morris Plains.

Harkins blasted a 15:45 to win the boys Senior Division race, slicing 45 seconds off his previous best time at Greystone that he ran at this meet last year.

Baeyens, in her first big race of the season, made a breakthrough of her own by capturing the girls Senior Division race in 18:31 as she cut 17 seconds off her former Greystone PR of 18:48 that she ran at the North Jersey, Sec. 2 Group 4 meet as a sophomore.

"I have a lot of big goals for this season,'' said Harkins. "But I knew the only way I could achieve them was to put in more work in the summer than I had in the past and get as fit as I could. This is the best shape I've been in coming into a season, and it's great to see my times coming way down.

Harkins should be in the mix to win some major championships this season.

"I want to bring my Holmdel time way down this year,'' said Harkins. "And I'd like to be right up near the front and try to win the county and conference and some other races. I'm real excited for the season.''

Baeyens was very happy to finally break her personal best from 2017.

"I've been working really hard and wanted to get a new PR today,'' said Baeyens. "I've been waiting two years to get it.''

Baeyens had a very strong junior XC season. She was fourth at the Somerset County Championships, 10th at the Skyland Conference meet, sixth at the state sectionals, and eighth at the State Group 4 meet, and ran a Holmdel best of 19:20.
Then last spring, she exploded by winning the 3,200 at the North Jersey, Sec. 2 meet with a PR of 10:39.08, ran a 1,600 PR of 4:56.24, and she placed eight at the Meet of Champions in the 1,600.
She is hungry for the best XC season of her life.
"I'm really determined to have my best cross-country season ever in my senior year,'' said Baeyens. ''I have a lot of goals that I'll be working hard to try to accomplish.''
While Harkins and Baeyens were the two biggest individual stars of the meet, Ridge was the most impressive team as the Somerset County power won the boys and girls overall team titles, finished on top of the merge scoring in both the boys and girls competition. The Ridge boys edged Skyland Conference rival North Hunterdon, 71-74 in the merge. Ridge, which won the Sophomore Division race, averaged 16:36 and North Hunterdon 16:37.
On the girls side, Ridge won the Senior Division title and was first in the merge, 83-93 over Mendham. Ridge averaged 19:56 and Mendham 20:03.
BIG STARS MISSING
Chloe Gonzalez of North Hunterdon, second at the XC M of C last year and the winner of the 1,600 at the M of C last spring, wasn't at the meet because she's visiting Villanova!
Jack Jennings of Mendham, an All-State XC runner last year, and Gavin Richards of North Hunterdon, one of the state's top milers last spring and a very strong XC runner, also didn't compete.
Jennings was a bit under the weather this week, so he was held out. Look for Jennings to blast a fast one at a dual meet this Tuesday at Greystone.
Richards had a slight IT band issue that put him a little behind in his training. He's scheduled to open his season at Bowdoin next week. 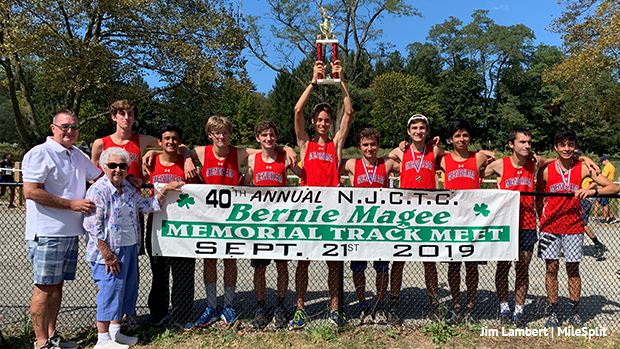