The Scotch Plains-Fanwood boys and West Morris girls made history on Sunday when both teams won sectional indoor titles for the first time ever and both 3,200-meter meet records were shattered at the NJSIAA North Jersey, Section 2 Group 3 Championships at the Bennett Center in Toms River.

The girls meet came right down the wire between sister schools West Morris and Mendham with West Morris winning the nail-biter, 65-64.

Trethaway's victory in the 3,200 gave West Morris a 61-58 lead over Mendham, which received a runner-up finish from Megan Timoney in the 3,200.

That three point lead was exactly what West Morris needed heading into the meet-concluding 4x400 as Mendham placed third (4:16.86) and West Morris was fourth in 4:19.68, just ahead of fifth-place Nutley (4:20.35). If Nutley finished ahead of West Morris then Mendham would have won the team title by one point.

There were several athletes who shined for West Morris.

There wasn't any drama in the boys team competition as Scotch Plains continued one of its best indoors seasons in several years with a dominating 72-46 victory over runner-up and defending champion Mendham. 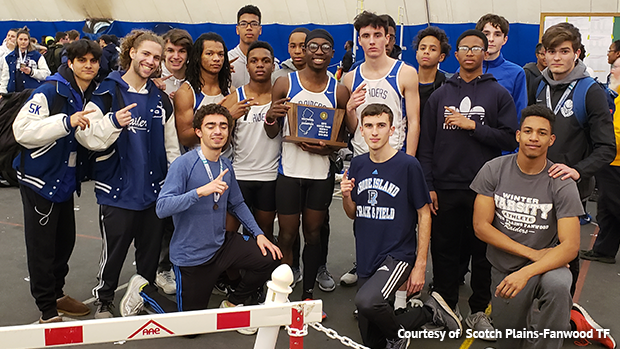 One of the biggest highlights of the meet was provided by Mendham's dynamic distance duo of junior Jack Jennings and senior Jack Stanley.