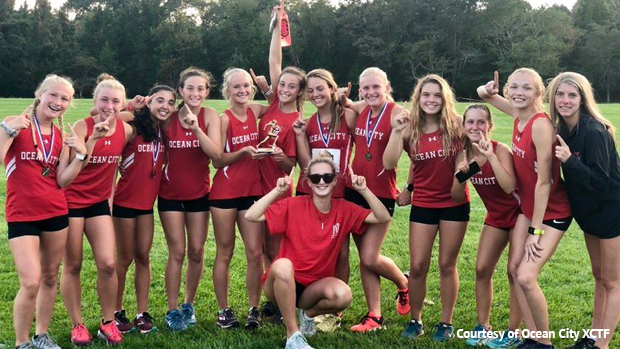 What a start to the season it has been for the Ocean City girls who have just won their second straight invitational. Sebastien Reed of Pitman went sub-16 to repeat and Red Bank Catholic's Maddy Kopec won a battle in the girls race running 18:41.

Friday afternoon, during the Osprey XC High School Invite, Ocean City won the girls varsity race with 56 points to out run second place Red Bank Catholic's 60, and Mainland Regionals 74 in third. Ocean City averaged 19:56 and brought in their top four before the 15th overall race finisher. Sophomore Alexa Palmieri once again found herself among the leaders finishing second at 18:49 to spark their run.

Ocean City is coming off another victory last weekend at the South Jersey Shootout where they posted 71 points in the merge averaging 20:50 on the brand new DREAM Park course.

For Red Bank Catholic's Maddy Kopec this is the second race of her season and first varsity XC win of her career. She did win the freshman championship at the New Jersey Catholic Track Conference Cross Country Championship in 2016. The returning Osprey Invitational champ Angela Bannan of Holy Spirit was also in this race, she finished third running 18:59.

For the boys junior Sebastien Reed of Pitman defended his 2017 Osprey Invite win by running the only sub-16 minute time of the day at 15:43. Behind him there was a mad dash for second place between Jensen Nunez of Pleasantville, Evan Chu of Washington Twp, and Mike Liberty of Oakcrest who crossed in that order all recorded running 16:20.

Freshman Jack Moran of Wall HS posted a top five with a 16:25, he was second in the freshmen division last week during the Battle at Ocean County Park.

Led by Evan Chu's battle for third place the Washington Twp boys earned the team title scoring 67 points, splitting a minute and 25 seconds between their scoring five, and averaging 17:06. A close team race with Ocean City in second scoring 72 points, Luke Kramer leading that squad in eighth at 16:37.

Also a shout out to the Ocean City boys JV squad for earning a perfect score of 15 points sweeping the top five. Brendan Schlatter leading that attack at 15:39 over a shorter 4K course.