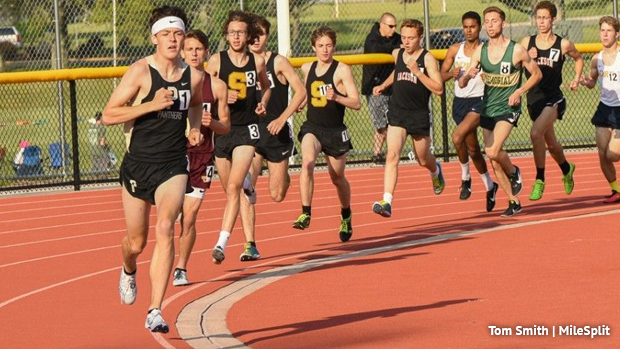 On Friday night in Shoreline, WA distance star Devin Hart began the first part of his will power testing cross country double by running 8:53.36 to finish fourth in the Brooks boys 2 mile run. The Pt. Pleasant Boro junior will be hopping on a plane from there to make it just in time to defend his 3200m title at the Meet of Champions Saturday evening.

After testing out the leaders early Hart found himself around sixth or seventh within a pack as the leaders went 4:32 through the mile.  For a moment it almost looked as though Hart was losing the pace falling back to 12th at one point but the multi-time state champion fought back hard. With 7:50 on the clock Hart was already back up to fifth at the bell and made his way to fourth before crossing the line at 8:53.36. That performance moves Hart up to sixth all-time in the event, Joe Rosa of West-Windsor Plainsboro North holding the state record at 8:44.06 since 2011.

The winner of the race was James Mwaura (WA) after a battle with sophomore Cole Sprout (CO) 8:48.76 to 8:48.45 respectively, the top eight all finished under nine minutes. This race was invaluable experience for Hart to go up against some of the best in the nation.

Sean Dolan of Hopewell Valley also made the trip and will be doing the same cross country rush back to New Jersey for the Meet of Champions. Dolan finished second in the 800m Friday night after a strong finish down the final stretch to run 1:51.91. The winner was Brandon Miller (MO) who posted a 1:51.85 to just hold off Dolan's final push to the line.