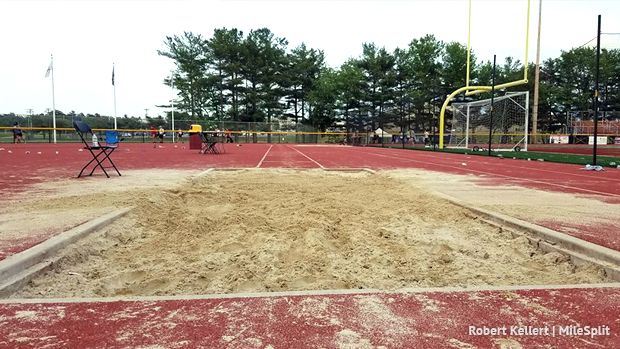 The defending Meet of Champions winner leapt to an incredible distance of 50-09.25 to take down the 50-06.75 all-time state standard held by Dominique Irons of Haddon Heights since 2013.

Just a week before at his Sectional Championships Burnett joined the elusive 50 foot club, becoming just the seventh in New Jersey state history to do so. Heading into this Group meet he had ranked third all-time with a 50-04.

Richmond Shasha of Hamilton West helped push Burnett there with his own impressive jump of 48-03.25 for second. Only a junior Shasha has seen some massive PRs this season, he had jumped 46-03.25 last week at Sectionals but before that his best was a mark of 42-11.

The signs have been apparent for a while now that Burnett was up for a big outdoor season, this past indoor he won Eastern States Championships with a mark of 49-01. That made him just the fifth boy to jump over 49 feet indoors in state history.

While looking over the '50 Foot Club' which holds the top seven spots in state history, we can see just how much improvement this event has seen recently. The top six all happened in the past ten years, with possibly more changes still to come this season.