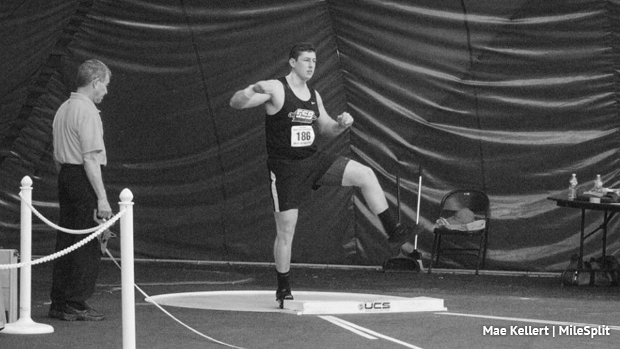 On Friday in East Stroudsburg, Pennsylvania during the Warrior Classic at ESU Gill St. Bernard's senior C.J. Licata launched a career best of 61-11 to win the shot put. That moves him up to US#1, one of only five to break 61 feet in the event throughout the country in 2018.

Licata's previous indoor best was set in December at the Jim Mitchell Invitational where he threw 60-09.75 and his outdoor best is 61-08.5 from last spring's Sectional meets. So far this indoor season he has won four meets including the Bishop Loughlin Games, Jim Mitchell, Somerset County Champs, and now the East Stroudsburg Warrior Classic. He also placed fifth in the weight throw at Bishop Loughlin with a throw of 53-05.5.

The senior throwing star is the top returning athlete for both the indoor and outdoor NJSIAA Meet of Champions. So far this season he is the only New Jersey athlete to break 60 feet and has over a five foot lead on the rest of the state, Brandon Patterson of Union Catholic is the closest at 56-10.

Some other New Jersey schools were also in attendance at the ESU meet. For Pope John XXIII Grace Campbell won the girls 800 meter running 2:25.40, Emma Myer was first for the 1600 meter with a time of 5:22.10. Newton HS senior Kayleigh Furth won the 400 meter with a 1:02.94 converted hand time.