After finishing second the week prior in a close one with Alyssa Aldridge during the Group 3 race, Monica Hebner knew the race adjustments she had to follow to get the win at the NJSIAA Meet of Champions. She executed that plan and ran a winning time of 18:13 for her first Meet of Champions title.

"I knew Alyssa had a great kick so I had to get separation earlier," Monica said post-race. "So coming out of the bowl that's where I went, surged for a little bit and hoped for the best."

That great move came after working her way back to the front from a tough start.

"I got kind of stuck in the pack, I wanted to be in the top third going up that first hill and I was far back." the Northern Highlands star stated. "It is so narrow it's really hard to pass, I got nervous but I ended up being able to find my way through."

Monica Hebner is the first from Northern Highlands to win the Meet of Champions title. She had a seven invitational or championship level wins this season and her only loss came during Group 3 when she finished second by only two seconds.

Her run of 18:13 is the fastest at Holmdel this year and ties her for 22nd all-time at the course with Kathleen McCafferty of Oak Knoll, who won the Non-Public B Group title in 2007 with that same time.

Monica's twin sister Isabel Hebner also had a great performance placing fourth overall at 18:28, the fourth fastest Holmdel time of the season. Both girls are heading to the University of Pennsylvania next fall. 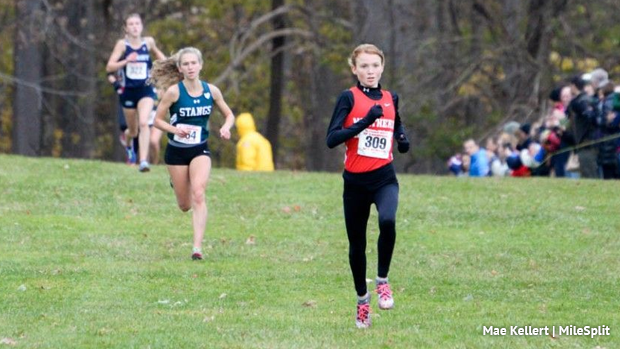 In second place was two time defending champion Alyssa Aldridge running 18:18, the same time she won Group 3 with a week prior. Aldridge still has Regionals and Nationals to go but she closed out a remarkable career on New Jersey soil. Over her four years at the Meet of Champion she won twice and finished second her freshman and senior seasons. The Mainland Regional star worked her way back from an injury that cost the start of her season.

Third overall was the top returner heading into next year Nicole Vanasse of Pingry. The Non-Public A champion ran another big course PR of 18:23 to break into the top 50 all-time at Holmdel. She opened her Holmdel Park season with a 19:31 at Shore Coaches, then ran 18:45 at Group Championships, and closed it out with her 18:23.