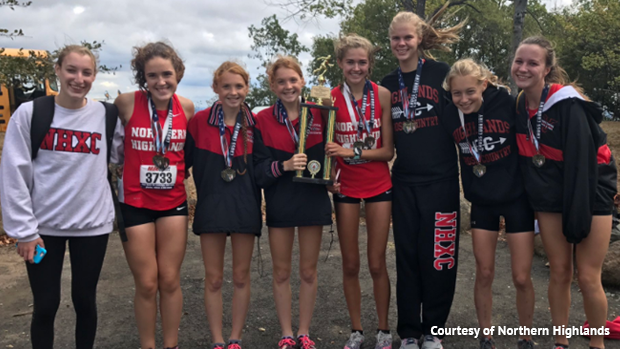 The Northern Highlands girls and St. Benedict's Prep boys used lethal frontal attacks to capture team titles, Mountain Lakes pulled off a team sweep, and Mount Olive had a big day at the Garret Invitational on Saturday at Garret Mountain in Woodland Park.

The most dominating performance of the meet came as no surprise as NJ #8 Northern Highlands packed five runners in the top 11 and averaged 19:50 to run away with the girls B Division title, 28-114 over Pascack Hills.

Northern Highlands was led by the remarkable Hebner twins, seniors Monica, first in 18:26, and Isabel, second in 18:50. Those were the top two times of the meet.

In the most dramatic finish of the day, junior Jaymin Mistry of Mount Olive edged Luis Peralta of Passaic, 16:20 to 16:21, to win the A race. The boys A team title went to Montclair, which crammed three guys in the top 10 and averaged 17:17 to defeat Passaic, 103-122.

Junior Jared Cooper placed first in the boys C race in 16:22 to spark Mountain Lakes to a 53-76 over Poly Prep of New York. Mountain Lakes put its top five in the top 20 and averaged 17:35

The Mountain Lakes girls also came out on top as Izzi Gengaro (19:57) finished first as the Lakers scored a 52-109 win over Sussex Tech in the C race.

In the girls A race, Mount Olive, led by junior Sydney Bradle's victory in 19:27, put three runners in the top eight on the way to a 56-89 triumph over Clifton. Mount Olive averaged 20:49.