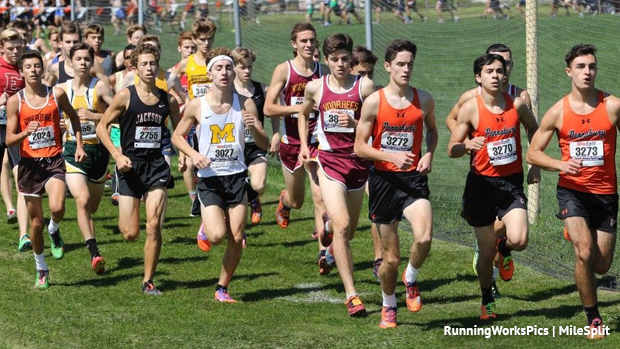 Here are the merged results from the Cherokee Challenge on Saturday. We have provided individual and team lists, the team lists can be viewed in both overall and New Jersey only formats. We have interviews, race videos, and photos still on the way.

On his third attempt Chris Romero earned a W at the Cherokee Challenge after finishing second and third in prior years. He achieved his victory in impressive fashion clocking a 9:32.93, the third fastest time during the past four seasons at this invitational and a solid 15 seconds ahead of the rest of his 2017 competition.

The team merge went out of state to Delaware's Salesianum School with 118 points and an average of 10:04. They were led by Michael Keehan who won the junior race with a time of 9:47.33, the second fastest athlete of the meet.  West Windsor Plainsboro South was the leading New Jersey school with 178 points in the overall merge and 118 in the NJ only listing. They averaged 10:12 and split a mere 27 seconds between their top five, which saw Justin Lopez out front thanks to his fourth place run of 9:57 in the junior race.

The girls top time went to Delaware's Keelin Hays of Tatnall, the talented runner posted an 11:09 to win the junior race. New Jersey's leader was Victoria Vanriele of Governor Livingston, the 800 meter state champion won the sophomore race with 11:39. She took the freshmen division last year, and is feeling great heading into the regular season.

Keelin Hays quality run was just the start of a great team performance for Tatnall who lead the merge with 130 points and an average of 12:03. For New Jersey West Windsor Plainsboro South once again was the standard, the girls scored third in the overall against strong competition with 164 points and on the NJ only listing impressed with 98. Their 12:20 average had Kelsey Kobus at the head placing fourth in the senior race with 11:58.