The Group 4 boys championship was a meet full of records and weekend leading performances. We'll start with the East Orange Campus team championship, their second in the past three seasons as well as in school history. The squad scored 41 points in a duel with Trenton Central who finished second with 36.

East Orange had one individual state champion, Cory Poole who won the 55 meter hurdles with an impressive run of 7.20, 7.29 in prelims. That performance tied the overall Group Championships meet record set by Jermaine Collier of Trenton Central in 2012. Poole holds the state record in this event thanks to a 7.13 he ran earlier this season. He also opened for East Orange's second place 4x400 meter and earned second individually in the 400 meter dash running 48.82. That 400 meter was a very close finish with Trenton Centrals Semaj Willis who out leaned for first with a 48.81 (watch here).

While East Orange may have only had one gold medal, they showed solid depth in the sprints and hurdles with multiple high placing performances. Akeem Lindo was second in the 55 meter dash running 6.51 and sixth in the 400 meter with a 50.41. Al-Tariq Dunson added to the 55 meter hurdles point total as well running third at 7.65. 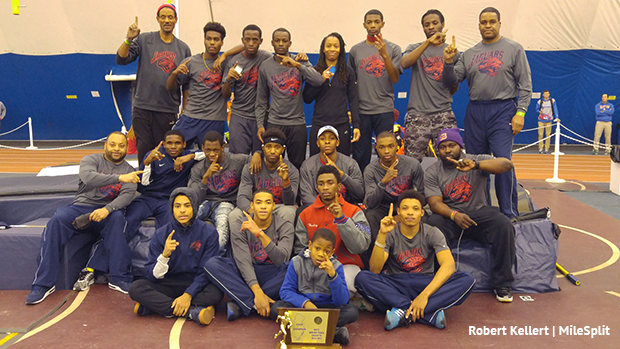 While East Orange ruled as number one in the team race there were plenty of great weekend leading performances elsewhere in this meet as well.

From Trenton Central, who placed second as a team with 36 points, Semaj Willis led the Groups weekend in both the 400 meter and high jump in impressive fashion. Willis took down the top seed Cory Poole at the line in the 400 meter with a 48.81 NJ#2, just .01 off the meet record set by Trenton Central graduate Zyaire Clemes in 2013. He also cleared 6-6 in the high jump to advance tied for the best of the weekend. In the 1600 meter his teammate Mulual Mu ran a state leading time of 4:16.03 NJ#1.

Watch all the Races Here

Toms River North had two state champions in this meet... Bryce Watts ran 6.41 NJ#2 winning the Group 4 title in the 55 meter dash and then in the shot put Ryan Roger threw for a winning mark of 55-7.5. Brandon Kong of Bridgewater-Raritan tied the state lead in the pole vault when he cleared 14-6 NJ#1 winning his second career state title.