A rainy chilled morning greeted the Greater Middlesex Conference Championships on Saturday. The athletes paid no mind however as some great championship caliber racing still hit the Thompson Park course.

Old Bridge senior Rey Rivera took the mile mark around 5:10 along with Patrick Walsh of South Amboy well in the lead. Eventually the rest of field came back to them but they finished by laying solid kicks down to take first and second overall. Rivera repeated as the GMC Champion with a time of 16:12, Walsh who had his highest career finish at this meet in second ran 16:23.

From there the story in the boys race when to Metuchen who scored 59 points to win their first GMC title in school history. Old Bridge finished second as a team with 67 points. Metuchen was led by junior Jake Beacher in third with a time of 16:31, the team split a quick 26 seconds between their scoring five and averaged 16:45. Check out their full team summary below.

You could tell early on the main goal was to have their pack remain intact most of the race and they did so for the win.

On the girls side Shelby Piccinic of Colonia HS made her own history when she crossed the line in first with an 18:46. She won her first GMC title after placing second last year and if that wasn't enough she is the first girl from her school's history to win this meet. Also running under 19 minutes was Chelsea Stocki of East Brunswick in second at 18:59.

The girls team title was won by South Brunswick with 50 points and a 20:03 team average. This is their second straight championship. They were led by sophomore Chantel Osley in fourth with a 19:12 and fit their top three finishers into the top ten of the race. Check out their full team summary below. 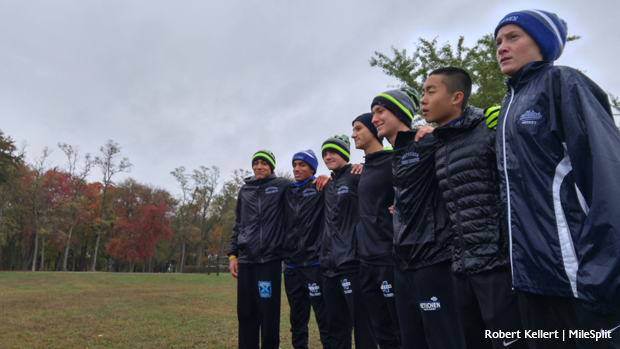