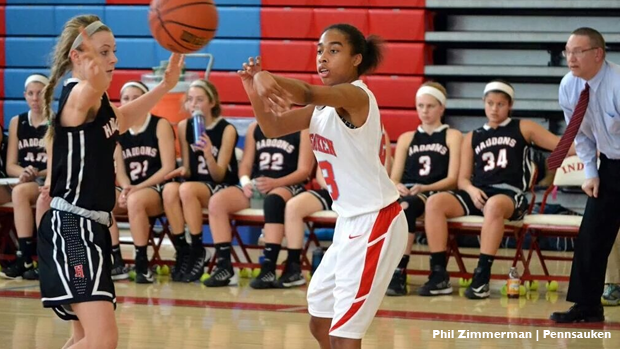 This picture is from Briana Roberts' sophomore year, recognize the other talented athlete guarding her? Thanks to Phil Zimmerman for the photo.

Pennsauken senior Briana Roberts had a strong high school cross country season where she won her county, sectional, placed ninth in her Group, and set a new Holmdel PR of 19:35. However she doesn't compete during indoor track because she concentrates on basketball during that time.

This senior year season she set out to chase down 1,000 career points and came very close finishing with 963, just 37 away from the prestigious milestone and still a very impressive total. Her season ended Monday with a first round loss to Moorestown in the Central Jersey Group 3 tournament, she put up 9 points in the 43-27 effort.

Her running coach Phil Zimmerman says that 1,000 point goal was definitely part of deciding to play her senior year instead of running indoor track after a strong fall season. "I know it was a tough decision for her this year. Never really been a hard choice in the past, she loves basketball," Zimmerman stated.

Definitely not an easy choice for athletes who split their seasons with multiple sports they excel at. State Champion Briana Gess of Haddonfield made that tough decision in 2014 as well choosing to leave the court and run indoor track and field, she is the athlete pictured above during her freshmen season guarding Briana Roberts.

Plenty of our top track and field athletes participate in multiple sports. Highland Regional's Joshua Clark who won the 2015 Meet of Champions during cross country also excels in wrestling, see article by Jim Lambert, and has a career record of 101-17.

Roberts does return for outdoor track and has had success on the 400 meter oval. Last spring she reached the Meet of Champions in the 800 meter placing 16th overall and is the 15th fastest returner from outdoor 2015 with a time of 2:15.83. She has goals of 2:10 in the 800 meter and to make it back to the Meet of Champions. For her team she hopes to secure both conference and sectional titles.

After this article was posted we received word that Halena Martin of Monmouth Regional is another great example of multi-sport talent. She hit the 1,000 point mark this past season and also made it to the Meet of Champions in the javelin and discus last spring. With bests of 116-6 in the discus, and 125-10 in the javelin she is eyeing a return to the big meet as well. Congratulations on the 1000 point career!

Now to the other high school student athletes. Do you participate in multiple sports or just concentrate on cross country, track and field all year round?

If you have interesting notes about our track and field athletes like this, whether it be in another sport, academic, humanitarian honors, and so on send them into rkellert@milesplit.com. Never know if they'll make it to the site!