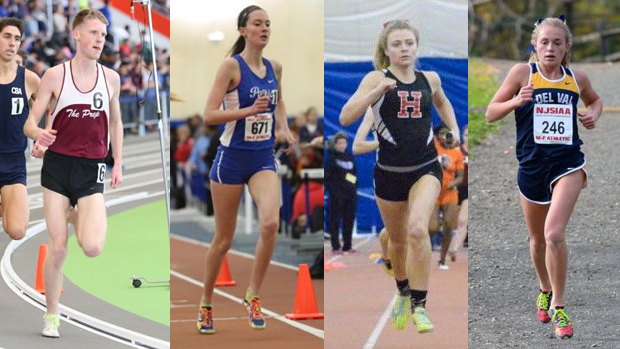 The final Millrose Games HS Mile fields have been released! New Jersey has four athletes who made the cut. Thanks to MileSplit NY for the list.

For the boys Patrick Sullivan of Don Bosco will represent the Garden State alone. He has an indoor PR of 4:24.90 in the 1600 meter, 4:21.29 outdoors. His best mile came during this indoor season where he ran 4:17.54 at the Hispanic Games back in early January. He currently ranks NJ#1 with that time.

The girls are led by Freehold Twp senior Ciara Roche who destroyed the Monmouth County meet record with a 4:51.86 in the 1600m ranking her NJ#1 and US#6 with the mile conversions turned on. Roche's best true mile came this indoor as well when she ran 4:57.69 at the Millrose Games Trials for 5th.

NJ#2 and NJ#3 on the 1600m/Mile list are also joining the party. Haddonfield junior Briana Gess has a best of 4:55.11 in the mile while running indoors which she ran placing third at the Millrose Games Trials, 4:51.44 outdoors.

Hannah Bonaguidi of Delaware Valley just ran 5:02.70 to win her Central Sectional this past weekend in the 1600 meter. She has a best of 4:57.79 in the mile run which she posted back in December at the Marine Corps Holiday Classic.