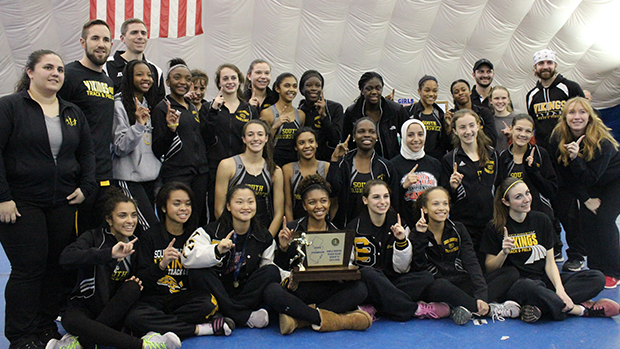 South Brunswick's field teams came up huge on Friday night as the Vikings won the Group 4 relay title scoring 40 points without winning a single event on the track.

Twenty points came from two gold medal finishes in the pole vault and high jump. To win the high jump relay South Brunswick totaled 10-02 led by Courteney Campbell clearing 5-02 and Sydney Schneider 5-00. In the pole vault relay they would add up to a height of 19-00, this time with Daniella Izzo and Maggie Kaplan both vaulting 9-06.

That's not to say South Brunswick didn't have a great night on the track as well. They finished second in the 4x200 meter running 1:47.93, second in the 4x400 meter with 4:04.96 NJ#3, and fourth in the shuttle hurdles running 33.54. Then they gave us this awesome celebration in the video below.

South Brunswick was pumped about their Group 4 state relay title! Check the site for full results. Photos on the way. We'll be at the State Relays all weekend.

Brunswick's victory came after a back and forth battle with Southern Regional for the scoring lead. Southern opened up the meet with a NJ#1 US#8 distance medley relay running 12:29.19. They followed that up with another state leading performance in the 4x800 meter where they posted a 9:42.75 NJ#1. Senior Southern distance runner Liz Chartier had a major role in each of those victories.

Southern Regional scored in every event but the shot put relay and had the points lead until two or three events to go. They made a valiant effort to regain control by scoring out of the slower heat in the 4x400 meter relay where they ended up running 4:05.84 NJ#5 for third but just fell short by three points when it was all said and done. They finished second as a team with 37 points to South Brunswick's 40. 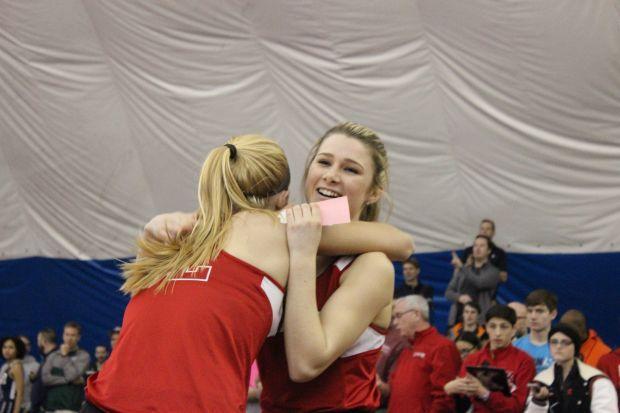 Lenape girls supporting and celebrating each other after a wicked SMR time. / Photo by Robert Kellert

Outside the team championship battle we had some stellar performances come through elsewhere. In the 4x800 meter relay New Jersey rewrote it's top five ranked girls teams with five teams under 9:55 in the event. In the 4x400 meter relay Piscataway took over the state lead with a NJ#1 time of 4:02.96.

The Lenape girls opened up in the sprint medley relay with a NJ#1 US#3 time of 4:10.22! That was ten seconds ahead of second place. That brought the meet total up to four in terms of state leading performances.

Check out the Top Finishers article for some more structured highlights and photos.