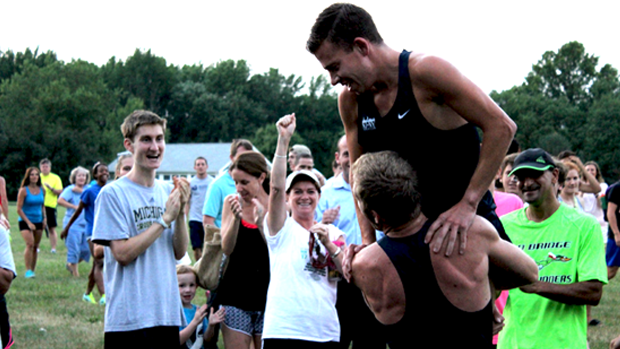 After the race Travis Mahoney was lifted and praised by teammates and the crowd. Photo by Robert Kellert for MileSplit

On Tuesday night Bennett Running held their annual twilight miles meet, where athletes of all ages and paces have a chance to run a mile according to their speed. Starting with an unpaced mile, sub 10 minute mile, sub 9 minute mile and so forth. This year there was the special category of sub 4 minute mile. Some great athletes led by Travis Mahoney from the NJ*NY Track Club decided to go after a mile under the infamous four minute barrier.

The plan was for Travis to follow his teammates, acting as rabbits, to a 59 second pace before a hard final lap all alone. The teammates helping out were: Christian Gonzalez, Wayne Batholomew, and Brian Hill.

This meet and race were huge examples about how awesome the New Jersey track and field community is. The 2008 Old Bridge High School graduate reached his goal of breaking four minutes, it wasn't his personal best but it was a track record at the Lincroft campus. The previous record was 4:18 by Tom O'Neil of Middletown North who ran the time this past spring.

Travis had already gone sub-4 back in February of 2014 at the BU David Hemery Valentine Invitational where he ran a 3:58.61 for 5th place. Travis' best event is the steeple chase where he recently placed 13th in the USA Championships running 8:55.81, his personal best in the 3K Steeple is an 8:30.87.

After the race Travis and the NJ*NY Track Club crew stayed to sign autographs and take pictures. For more information about the club and possibly donating check out their website.

Congratulations to everyone who ran their goal times Tuesday night!

Here is the race video, celebration, and his speech to the crowd!

Thanks to everyone that came out to support me today! You have no idea how much it helped. So happy to throw down a sub 4 on NJ turf! 3:59.3

The crowd gathers around Mahoney after the race.