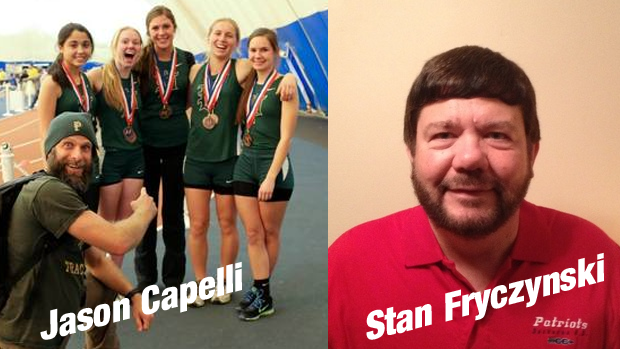 Over 1,000 coaches were nominated and TWO of our very own New Jersey coaches were selected for the 25 finalists, Stan Fryczynski of Secaucus and Jason Capelli of Pinelands Regional! Voting ends on July 31st and users are allowed to vote once per day.

I apologize, when I first released this article it only included Stan, I did not realize Jason Capelli had made the finalists as well! Congratulations to both for making it so far!

"Over four years, Coach Jason Capelli turned an 0-7 Pinelands team into 7-0 Conference Champions. This success began with Coach Capelli’s dedication and passion for his team. In fact, during one winter storm, the coach used his prep period and lunch to individually shovel all six lanes of the school’s track for practice. “Standing in front of us looked like the abominable snowman; coach was standing there in his snow covered running gear,” wrote one athlete. “His dedication rubs off on each and every one of my teammates and inspires us to try our best in everything we do,” wrote another athlete. Coach Capelli was also instrumental in organizing the team during Superstorm Sandy to go through destroyed homes, distribute supplies and volunteer at storm shelters. Although he personally experienced trials from Sandy, he used the storm as a teaching opportunity for his student athletes about life and giving back. “He can be a trusted academic mentor, and the most steadfast of friends,” finished another athlete, relating that Coach Capelli’s impact goes far beyond the track."

"With his beard, sky blue hat and distinct laugh, Coach Stan Fryczynski has become an iconic figure in New Jersey running. Coach Fryczynski has continually gone above and beyond his coaching responsibilities to help athletes in life crises including hurricane relief, flooded homes and other times of tribulation. “It is impossible to not smile, laugh, or be upset around him” expressed one former athlete. In fact, most of his athletes view him as more than a coach, and instead as family. “It was hard for me to fathom that Stan Fryczynski would no longer be my coach. He was not only my cross country coach, he became a second father to me,” wrote another nominator. In 41 years of coaching, including NJ Hall of Fame inductions, athlete and team accomplishments, and other accolades, Coach Fryczynski’s legacy is made of the lasting relationships he’s built and maintained with thousands of athletes."