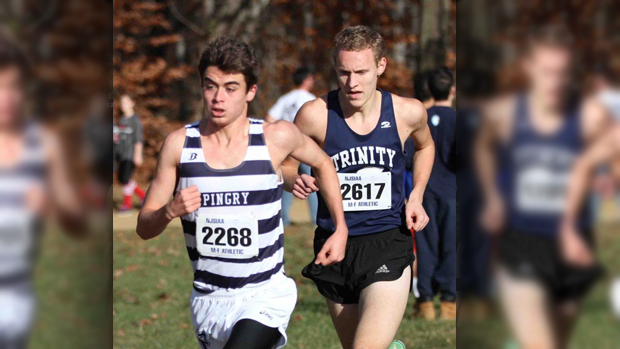 Josiah Hanko of Trinity Christian School, on the right, battling against Liam Mullett of Pingry, on the left, at Holmdel this fall.  / Photo by SJPixShooter for MileSplit

While entering results over the weekend I noticed a familiar name from an athlete that has missed some time due to illness and injury. The Duke University commit Josiah Hanko is back in action! The Trinity Christian School star has been recovering from not only Lyme disease which took him out of the entire indoor season, but after emailing with his coach on Friday I also learned that he suffered through an Achilles injury that set him back some time.

The medium sized MACSA HS Invitational meet took place in Grantham, PA. Commenting on his race Coach Brian Lee said, "conditions were brutal" but "all in all he had a good day". He also noted that there were only 30 minutes between Hanko's 55.58 first place 400m and the 2:10.60 second place 800m performances.

The last time I spoke with Josiah was during Cross Country season after he won the Non-Public B Championship at Holmdel.