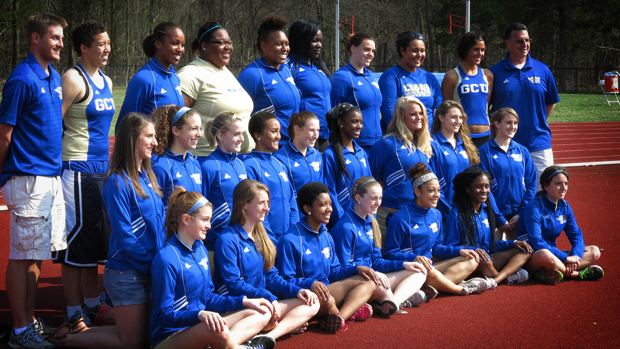 Photo / Robert Kellert / MileSplit / Georgian Court women's track and field program set up for team photos spring 2013.
In only four short years of existence the Georgian Court University womens track and field program has accomplished great success. The team's members can be found in from states such as Connecticut, New York, Maryland, and Pennsylvania but the heart of the team is made up of the home grown talent of New Jersey.
Not only is the team enjoying the success but big changes are underway for the program. This coming year will feature the first boys Georgian Court track and field program as the university has made a decision to adopt a co-educational campus after only allowing women to live at the college for it's 105 years of existence.
I went to visit the team last spring for a closer look as well as to meet some of the stars on this track club. Those interviews are in this video embedded below. If you love throwing events I highly suggest a watch!
Head coach Mike Murawski goes into more detail on the school's latest successes,  The team will also be entering the CACC Conference during outdoor season after being competitive in the ECC where they will remain during the indoor season.
"The Georgian Court University women’s program has welcomed the incoming men’s program with open arms after a stellar indoor and outdoor season where they captured the Outdoor ECC Conference Championship.  During last year’s Conference Championship run the team broke a total of 15 school records while making a clean sweep at the Conference Championship.."
Some individual rewards honored to GCU girls last season included:
Women's Outdoor Athlete of the Year - Alyssa Hudgins
Women's Outdoor Academic Athlete of the Year - Lauren Calorel
Women's Outdoor Coach of the Year - Michael Murawski
Coach Murawski continues..
"GCU is excited to see the growth of the team this year as we had 3 athletes represent the University at the National Championships (indoor and outdoor), in a total of 7 events.  Two of the athletes had All-American performances:
Alyssa Hudgins / Senior / 5th Place / Indoor Weight Throw / Birmingham, Alabama
Tiffany Okieme / Freshmen / 2nd Place / Outdoor Shot Put / Pueblo, Colorado
Okieme also earned a chance to compete at the USA Junior Championship in Des Moines, IA where she took 4th place in the shot put and was named to Team USA as an alternate for the World Championship."
All of the coaches, inlcluding coaches Joe Napoli (throws) and Jen Patterson (Distance) as well as the current athletes are looking to grow and expand the team in the coming seasons as well as transfer the amazingly quick success of the girls program to the mens side.
Tweets by NJMileSplit