On Thursday Night at Monmouth University the second running of the Monmouth Mile, a summer sub-4 attempt following community miles, took place. And once again it was a great event furthering the sport.

Eric Holt put the finishing touches on an electrifying performance with a huge surge over the final 50 meters to break four minutes for the first time and pull off a stunning upset victory in the men's elite mile at the Monmouth Mile on Thursday night at Kessler Stadium at Monmouth University in Long Branch. 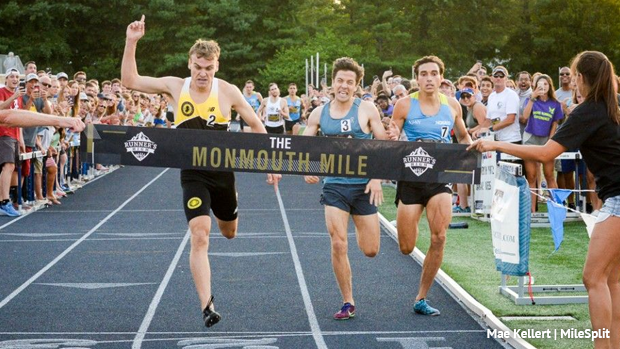 Holt, a true blood and guts runner, made a huge move with about 250 to go to take the lead, but Gorman quickly surged back in front. Gorman then hit the gas again as they hit the top of the homestretch, setting the stage for a breathtaking sprint to the finish.

"I dreamed of something like this my whole life,'' said Holt. "I knew my only shot to break four was to go after the win. It was painful, but I knew I had to pour everything I had into the last 100 meters to have a shot. This is all I've ever wanted, and have some many people to thank. I've been an underdog my whole life, and was again today. But this goes to show all the runners out there that if you want something bad enough and work hard enough, you can make your dream come true.''