Under the Lights: 2011 Randolph Invitational 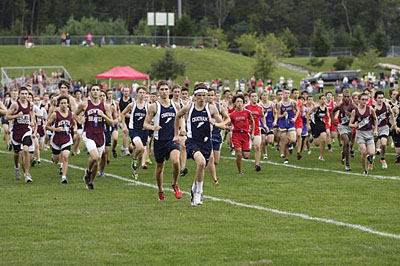 
Though neither  the Voorhees’ boys or girls teams finished their respective races after sundown Saturday night at the Randolph Invitational, both squads experienced shining moments under the lights at Freedom Park. With an electric crowd gathering to ring in the 2011 Cross-Country season, senior Harrison Brakewood put on a gritty performance to win the Varsity Boys B race, and about a half hour later the pre-season state favorite Voorhees girls came and took care of business by winning the Varsity Girls B race in dominant fashion. Brakewood, a top contender for the Group 2 individual crown this season, broke out of a pack of about 6 runners with less than a mile to go, but had to shrug off speedy Union Catholic senior Allen Eke down the finishing stretch to claim the title. Eke, a powerful 800 meter runner on the track, seemed to be using his kicking speed to move by Brakewood as the two crossed the soccer field, but the Voorhees runner put in one final charge and beat his counterpart to the line by a few strides. Brakewood, who was 13th in last year’s race, battled the muddy course conditions to finish in a fine time of 16:28.9.
The talent of the always dangerous Voorhees girls team was on full display Saturday, as the group of mostly underclassmen who hope to win a Meet of Champions title this fall, dismantled the field by packing all 7 runners into the top 10 and defeating runner-up High Point by a 25-94 score. Sophomore Nisa Cicitta led her team when she edged Chatham’s Tara Hanley by a fraction of a second to take the individual title. Cicitta was running up front with Hanley and teammate Clarissa Modde as the field approached the two-mile mark. When the runners emerged at the far end of the soccer field, Cicitta was gaining speed and battling step for step with Hanley as they neared the tape. As both runners slowed in the finishing chute, it was unclear who had taken the victory until officials pulled Cicitta in front of Hanley. Both runners finished with the clock reading 18:55. Cicitta’s teammates then followed her in like gangbusters, and a short while later it was very evident that Voorhees had their title.
The highlight of the night came during the Varsity girls C race, when national distance superstar Mary Cain of Bronxville, New York blazed through the trails of Freedom Park and went on to crush the course record by 12 seconds. Cain came through the line in a scorching fast 17:50, taking down the previous record of 18:02 set by Lauren Penney of Roxbury. She left her competitors in the dust, but was backed up by her impressive Bronxville team, which jammed 4 runners in the top 6 to easily win the team title. Bronxville was also the story in the Varsity Boys C race, as Dayton Flannery coasted to a gold medal in 16:32 over New Providence’s Everett Price, and his team also earned a trophy with a 33 point win over Saint Rose.
As darkness fell and the lights took full effect around the park, the feature showdowns of the meet got underway with the Varsity A races. While not quite as much drama was produced from these races, they did provide plenty of noteworthy efforts, especially from Phillipsburg senior Jon Harper. Harper blasted a very fast 15:56 winning time, as he pulled away from a large group of fellow group 4 runners to finish 9 seconds shy of the course record in beating Tyler Gibbons of Ridge by more than 20 seconds. Powerhouse Saint Anthony’s of New York easily took the team title. In the girls A race, Ridge and Randolph waged a tight team battle to conclude the meet. Ridge, led by third place finisher Caelainn Carney, put five runners in the top 20 and bested their rival by a close 12 points. The outcome would have been closer, however, had misfortune not struck Randolph frontrunner Samantha Jones. Jones, one of the state’s elites, was running in second place for most of the race behind race winner Gianna Frontera of Newburgh, NY, until the final half mile when she began to struggle. Jones barely made it to the finish line, crossing in 9th place, when she fell to her knees and was held by an official who called for help. The senior star was attended to at length by officials, trainers and coaches who appeared to be treating her for dehydration. Jones was taken to a local hospital for observation and was released with no diagnosis for her ailment.