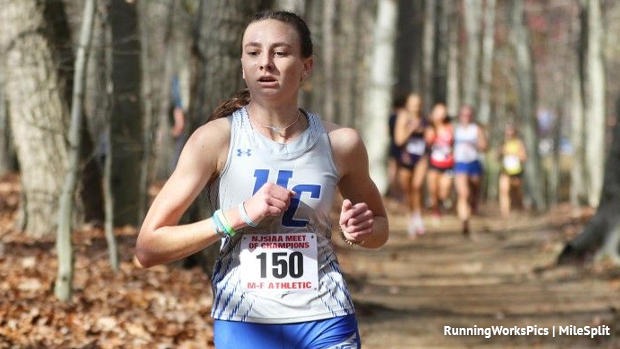 Kaleigh Gunsiorowski, who helped lead Union Catholic to its greatest cross-country season ever and a final ranking of No. 1 in the state, has announced her college plans.

In her second season of XC after giving up soccer last year, Gunsiorowski finished fifth at the State Non-Public A Championships to lead the Vikings to a second straight title. She followed that up by placing fourth at the State Meet of Champions in 18:57 to spark the Vikings to its first ever girls title, and then placed sixth at the Nike Northeast Regional Championships in 19:09  to spark her team to a runner-up finish, which gave UC an automatic berth in the Nike National Championships. Gunsiorowski capped her season by finishing 91st in 18:43 the field of 195 at the Nike Nationals.

Gunsiorowski, who finished her career with a Holmdel Park PR of 18:46, also owns track PR's of 2:12.26 for 800 and 4:59.61 for the mile.
Gunsiorowski said Notre Dame is the perfect fit for her, athletically and academically.
"I'm super excited to continue my academic and athletic careers at such a prestigious school and program,'' said Gunsiorowski. "As a top 10 women's distance program in the country with an incredibly successful school of business, Notre Dame has the perfect balance for my future, and I cannot wait to see what the Lord has planned for me. I knew since the moment I stepped foot on campus for my official visit that Notre Dame was where I wanted to be. The team was incredibly welcoming and I could tell each of them were eager to improve an already stellar program. The traditions that the school and team hold have values behind them that line directly with the way in which I was raised and how I plan to continue on throughout college. I am so grateful to be part of such a speedy recruiting class, and for the opportunity I have been given. I cannot wait to make the most of this experience as a member of the Fighting Irish.''