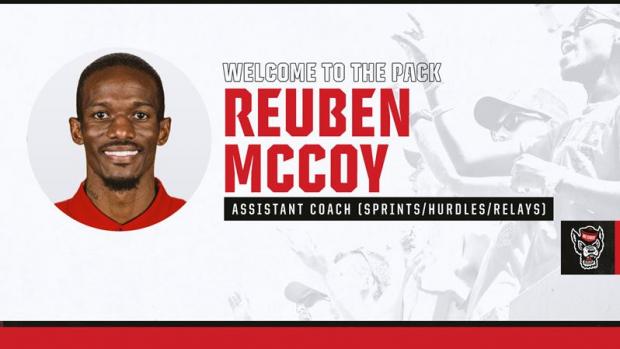 Reuben McCoy, one of the greatest track and field athletes in NJ history, was named an assistant track and field coach at North Carolina State, it was announced by head coaches Rollie Geiger and Laurie Henes on Wednesday.
McCoy will oversee the Wolfpack sprinters, hurdlers and relay squads.
"It's a great honor to be a part of the Wolfpack family at NC State," said McCoy. "This is a proud and prestigious historical program, setting the precedent for me to bring everything I can contribute. I'd like to thank Coach Geiger and Coach Henes for entrusting me to play a part in contributing to the program's vision. Talking with them, you quickly grasp the principles of family first and athletic excellence. I'd also like to thank the staff and administration of NC State for welcoming me. Go Wolfpack!" During his high school days at Winslow, McCoy put together a legendary career.
As a senior in 2004, McCoy split 46.0 on the anchor leg to bring Winslow across first in the 4x400 relay at the Penn Relays to earn MVP Honors. No NJ team has won the 4x400 since.
Later that season, McCoy became one of just five boys in state history to win four events at the same State Group Championship meet, and he became the only boy in state history to win three individual events at the same Meet of Champions. At the Group 4 meet, he won the 400 hurdles in 51.99, the 400 in 46.67, the 110 hurdles in 14.32, and the 200 in 21.14. Then at the M of C, he won the 400 hurdles in a then meet record 51.39, the 200 in 21.51, and the 400 in 47.42.
After graduating from Winslow, McCoy went on to star at Auburn.
At Auburn, McCoy won the gold in the 400 hurdles at the 2005 Pan Am U20 Championships, captured the 2006 SEC outdoor title in the 400, placed second at the 2008 NCAA Outdoor Championships in the 400 hurdles, and ran a PR of 48.37 in the 400 hurdles. McCoy,  who graduated from Auburn with a degree in English and a minor in sociology in 2008, was inducted into the South New Jersey Sports Hall of Fame in 2017.
McCoy joins the NC State program from Kennesaw State where he spent one season as the sprints and hurdles assistant coach. Prior to his time with the Owls, he coached at Syracuse and served as an assistant coach at Auburn.
"Coach Henes and I are extremely excited to have Coach McCoy join our staff," said head coach Rollie Geiger. "He brings a wealth of experience and knowledge as both an elite athlete and coach. He has been been mentored by some of the great sprint/hurdle coaches in the US and comes highly recommended by them. We can't wait for him to get started and be part of the Wolfpack family."
In the 2021-22 season at Kennesaw State, McCoy guided multiple sprinters to NCAA East Regional berths. Members of the squad competed in the men's 200m, 400m and 4x100m as well as the women's 100m hurdles at the Regional. Kennesaw State's men's 4x400m relay team brought home the gold medal at the 2022 ASUN Outdoor Championships, setting a meet record with a 3:09.21. At that meet, the Owls took 10 podium spots in sprinting events.
At the indoor meet, members of the Kennesaw State squad medaled in the women's 400m and 60m hurdles as well as the men's 200m, 60m hurdles and 4x400m. At Syracuse in 2019, McCoy coached Tyler Garland and Brevin Sims to indoors All-ACC honors in the 60m hurdles
McCoy spent the 2015-16 and 2017-18 seasons coaching at Auburn.
In 2017-18, he was an administrative assistant with Auburn working with academics and helping to coordinate team meetings, functions, travel and housing.
While coaching at Auburn, McCoy worked with Akeem Bloomfield, the indoor and outdoor NCAA 400 runner-up in 2018 (behind current World Champ Michael Norman), and All-American quarter miler Nathan Allen. He also worked with Anthony Schwartz who ran a time of 6.59 seconds in the 60m, and Shaun Shivers, who qualified for the NCAA East Preliminary Round with a time of 20.99 in the 200m.