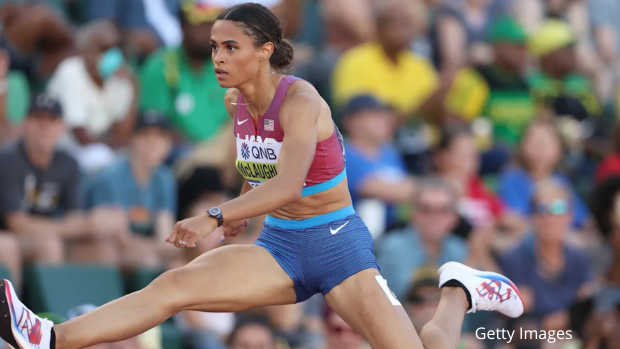 After what Sydney McLaughlin did on Wednesday night, the superstar from New Jersey looks poised to throw down another historic performance in the women's 400-meter hurdle final at the World Championships.

The 22 year-old McLaughlin, a 2017 graduate of Union Catholic High, served notice that she's ready to once again do something spectacular in the final by easily winning her semifinal heat in the 400 hurdles with a very fast 52.17 on Wednesday at Hayward Field in Eugene, Oregon.

Despite backing off the gas after coming off the last hurdle, McLaughlin just missed breaking the World Championship meet record of 52.16 set in 2019 in Doha by defending champion Dalilah Muhammad of the U.S., and her time would have been the world record three years ago.

McLaughlin, the gold medalist in the 400 hurdles at the Olympics in Tokyo last summer, has lowered the world record three times in the past 13 months, and her performance in the semifinals suggests that she's prepared to break it again in what has the makings of another epic showdown with Muhammad and Femke Bol of the Netherlands in the final on Friday at 10:50 p.m., which can be seen on the USA Network.

The final will be a rematch between the three medalists from the Olympics last summer, who are also the three fastest women in world history. McLaughlin won the Olympic gold in a then world record 51.46 (she lowered it to 51.41 at the U.S. National Championship at Hayward Field last month). Muhammad was second in a PR of 51.58, and Bol was third with a PR 52.03.

After the semifinals, Muhammad told Lewis Johnson during an interview on the USA Network that she feels she will have to run two seconds faster to have a chance to win the final. She's probably right.

With the amount of talent in the race, there is no doubt that McLaughlin's world record of 51.41 could fall.

The question is by how much????

I wouldn't be surprised if she did!! Would you?

Here is a look at the world record progression in the women's 400 hurdles.