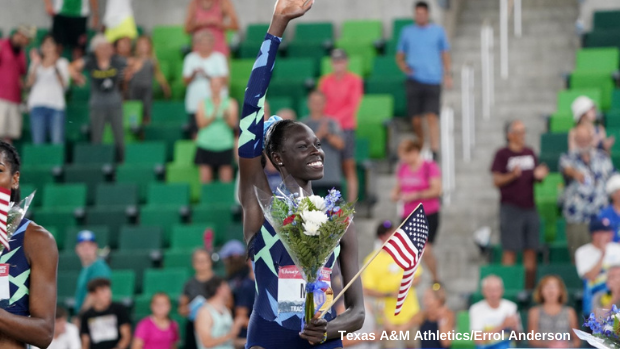 Athing Mu, who dominated her competition at the NCAA level as a freshman at Texas A&M this past season, did the same thing to the best half milers in America on Sunday night when she blasted away from the field over the last 200 meters to win the 800m in 1:56.07, No. 2 in U.S. history, at the U.S. Olympic Trials at Hayward Field in Eugene, Oregon.

The 19-year-old Mu, a 2020 graduate of Trenton High, narrowly missed breaking the American record of 1:55.61 as she took down the Olympic Trials record, lowered her World Junior Record, and took over the World lead.

Neptune native Ajee' Wilson, who set the American record of 1:55.16 in Monaco in July of 2017, had to mount a furious charge to earn the third and final spot on the Olympic Team. Wilson was in sixth-place with about 75 meters to go before she unleashed a big kick to pass three runners in the final straightaway to cross third in 1:58.39.

Mu, who had splits of 57.53/58.54, avoided a near disaster near the 200 mark of the race when Nia Akins clipped her heel from behind, sending Akins crashing the track. Mu stumbled briefly after the contact, but quickly recovered and charged to the lead just after the start of the bell lap, and then she poured it on coming off the final turn, using a 28.49 final 200 split, to gap the field on the way to the stunning victory. Raevyn Rogers, the 2019 World Silver medalist, was sixth with 200 to go, but she closed fast to finish second in 1:57.66. 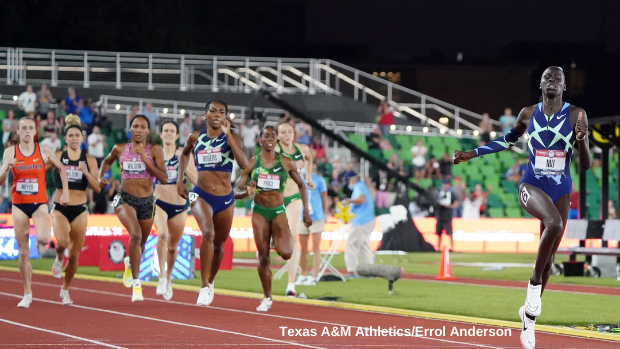 Mu, Rogers, and Wilson, will represent the U.S. at the Olympic Games in Tokyo, which are scheduled for July 28-Aug. 8.

The finishes by Mu and Wilson raised the final total to six athletes from these trials who graduated from NJ high schools who made the U.S. Olympic Team. The other four are Sydney McLaughlin (Union Catholic High School), who ran 51.90 to break the world record in the women's 400 hurdles, Keturah Orji (Mount Olive High), who won the women's triple jump at the Trials for the second time, Curtis Thompson (Florence High), who won the men's javelin, Sam Mattis (East Brunswick High), who placed third in the men's discus.

This is the second time that McLaughlin, Orji, and Wilson have made the Olympic Team. All three competed at the Rio Games in 2016.

The remarkable performance by Mu, who announced last Wednesday (June 24) that she was turning pro and signing with Nike, makes her one of the favorites to win the gold in Tokyo as she and Wilson will attempt to become the first U.S. woman to win an Olympic medal in the two-lapper since Kim Gallagher won the bronze in Seoul on 1988. The only American to win the Olympic gold in the women's 800m is Madeline Manning in 1968.

With Mu, McLaughlin, Wilson, and Orji, there's a great chance that a NJ woman will finally win an elusive Olympic gold medal in an individual event. English Gardner (Eastern High School) struck gold at the 2016 Rio Games, but that came on the 4x100 relay.

Speaking of relays, it would be a shock if Mu and McLaughlin are part of Team USA's 4x400 relay pool in Tokyo. The U.S. will be heavily favored to win the Olympic gold in that event.