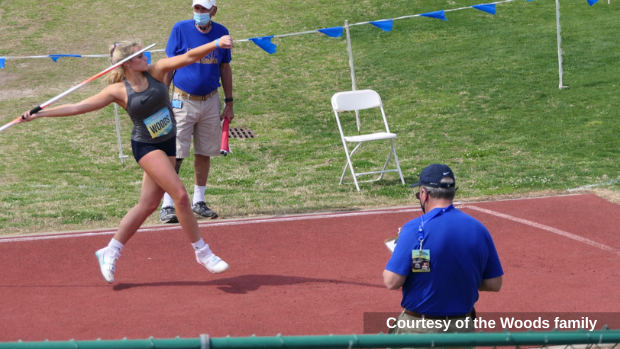 Niki Woods spent a lot of time when she was in middle school going to high school track and field meets when her older sister, Sydney, was competing for Demarest a few years ago.

But, instead of watching Sydney, who holds the Bergen County indoor record of 13-0.75 in the pole vault and is No. 3 all-time in NJ history in that event, Niki was fascinated by watching a different field event.

"Even though I was supposed to be watching Sydney pole vault, I was much more captivated by the spear throwing off on the side,'' said Niki.

Sydney sensed that Niki and javelin would be a perfect fit, so when her younger sister went out for the track and field team as a freshman at Demarest in 2019, Sydney encouraged her to pursue the javelin.

"I have a history in sports like softball, and volleyball that all include some sort of throwing motion,'' said Niki. "So when I came into high school, my sister was the one who told me to try out the javelin, and that I might be good at it. I tried for the first time when I was a freshman, and have learned to love the event ever since.''

After throwing in the 110 range for most of her rookie season, Woods exploded for a 122-10 to win the 2019 North Jersey, Section 1 Group 2 title as as a freshman. Ever since then, Woods has been a student of the event, been driven to be the best thrower she can be, and has worked tirelessly with her coaches at Demarest and with a personal coach on improving all the intricate techniques that need to come together to be an elite javelin thrower.

All that hard work has paid off for Woods as the junior has ascended to the very top of her event in the state this season!!

NJ MileSplit recently caught up with Woods for an in depth Q and A before she defends her javelin title at today's North Jersey, Section 1, Group 2 Championship at Wayne Hills.

Woods talked about creating her own path in track and field, how much the Mirabelli family has helped her become the state's top thrower, her goals to become a Meet of Champions winner and an All-American, how throwing the javelin is way more difficult than it looks, and much, much more.

So, kick back and enjoy our latest installment of Feature Friday as we shine the spotlight on Demarest junior Niki Woods, the state's top javelin thrower.

NJM: What's your reaction to your 141-9? I know it always feels good to PR, so you must have been thrilled?

I had actually hit a similar PR in March (141-4), so the increase was not huge. However, this throw was especially significant for me after having about a month of being stuck in the 130's. I had to start from scratch, focus on the small details, and eventually work my way back to throwing hard. So, when on Friday I finally got 3 throws over 140, one of them being a PR, I was super excited and definitely really proud of myself.

What does it feel like to be the No. 1 ranked javelin thrower in the state? I know how hard you've worked to reach this level.

It definitely feels surreal to be sitting at the top of the state right now. Freshman year I set goals that by my senior year I would be one of the top throwers in the state. I'm excited and honored that those goals have come a year earlier, but I still have so much to improve. Everyday is an opportunity for me to get better and chase more goals that I have set for myself as time has passed.

What are your biggest goals for the rest of this season, Niki?

This season, I have been working hard with my team and coaches, and taking further steps for our girls team to be state champs. We have an amazing group of girls on the field as well as the track, and I think if it is possible any year it would be this year. Individually, I am striving to become a state champion, and place 1st at the state Meet of Champions. I have also gotten the opportunity to qualify to compete in the National Meet at the University of Oregon this summer, and it has always been a dream to be an All-American.

You had a great freshman year, hitting 122-10 in the javelin to win the sectional title. Since then you've improved by nearly 20 feet. So tell me what the biggest difference is between where you were then and now? In what areas of the javelin have you improved the most to get into the 140's?

I had always had strong shoulders and arms because of my history in volleyball, so my 122-10 freshman year was mainly because of my raw strength. However, since then I have worked with many coaches, improving my form, rhythm, and speed down the runway. By simply learning how to throw a javelin the correct way, it has allowed me to increase in numbers greatly since freshman year.

A lot of the state's best throwers have personal coaches that they work with along with their high school coaches. How about you?

During my freshman year, I was introduced to a javelin thrower, Chris Mirabelli (a NJ Meet of Champions winner in the javelin at Holy Cross and a multiple All-American at Rutgers). He coached me for about half a season, and really was the one who taught me the basic knowledge behind javelin. After that, he introduced me to his father, Coach Mark Mirabelli. I have been training with Coach Mirabelli for almost 2 years now, and his help has got me to the point where I am today. Despite the two hour car ride to go to practice with him, I have been able to see him religiously during the summer, and almost twice a week while I am in season. He has completely improved my form and power, while also helping me have a better and more positive mindset towards the throw. He is a phenomenal coach and a huge factor in my success.

While I was in middle school, I often went to watch my sisters track meets at the high school. Even though I was supposed to be watching Sydney pole vault, I was much more captivated by the spear throwing off on the side. I have a history in sports like softball, and volleyball that all include some sort of throwing motion. So when I came into high school, my sister was the one who told me to try out the javelin, and that I might be good at it. I tried for the first time when I was a freshman, and have learned to love the event ever since.

I could say that the reason I chose javelin was because I wanted to stray away from my sisters legacy and find my own niche. However, the real reason is that I never really had any desire to be suspended 13 feet in the air upside down on a pole. But looking back on it, I am definitely glad that I chose my own event to pursue. It has allowed me to grow as an athlete, without feeling the need to live up to the success of my sister. We both have found what we enjoy doing, and getting the opportunity to both be at a high level in high school has made our bond even stronger. We are each other's biggest supporters and I am so proud of her always.

I began throwing in February of my freshman year. It is definitely a fun event so I grew a liking for it immediately. However, at first it was very frustrating because I really had no clue what I was doing and was confused as to why the javelin was spinning in all directions and landing 40 feet in front of me. I then had about 2 months to learn more about the event, and opened up my first track meet at about 110 feet. That number gave me the confidence to keep continuing to learn and grow in the event.

What do you love the most about being a track and field athlete and about throwing the javelin?

I love track and field because of how supportive everybody is of each other. Since everybody has their own events, we are able to be each other's biggest fans without jealousy or competition getting involved. You can even catch the throwers cheering on our teammates in the 2 mile, an event we know nothing about. That is the type of family aspect and atmosphere that I love about track. Specifically regarding javelin, I appreciate how it allows you to grow as an athlete, and really focus on your own training. While team sports are fun and exciting, individual events like javelin take a mental strength incomparable to anything to any team sport I have ever played.

When would you say you had your first huge breakthrough moment when you realized you could be a great track and field athlete?

The biggest moment that inspired me to pursue the javelin was my 122-10 throw in my freshman year. Before that I was throwing decent numbers, but not really seeing much progress. However, after that almost 11 foot PR, I knew I could keep getting better if I put my time and effort into it. From there, I began training all summer with Coach Mirabelli, and really dedicated myself to become a better athlete.

What's the hardest part about learning how to properly throw the javelin? So many people think it's so easy, but there are so many different aspects to the event and so many technical things that have to be worked on to throw as well as you do. It's way harder than people think.

It is definitely harder than people think. The hardest part about learning and beginning to throw a javelin is understanding that it is not the same as throwing a ball. At some point in our lives, everybody learns how to throw a baseball, or a softball. When starting the javelin, people assume that it is the same motion. However, if you throw a javelin like a baseball, not only will your shoulder and elbow be in pain for the next few days, but it won't go far at all. Understanding that javelin is a stretch reflex motion and not a typical throwing motion is one of the most important things.

Who is your favorite college/pro javelin thrower to watch and why? And what have you learned from watching them?

My favorite javelin thrower to watch is definitely Mackenzie Little. I often find myself watching her old videos before I compete for inspiration/reference. She has so much power in her throw, while also having almost perfect form. I watch her videos in order to work on being way more explosive when I hit my block, something she is great at.

What are your biggest long-term goals in track and field for college and beyond?

I have high hopes to compete at a D1 college for four years, and also get a great education in the meantime. I would love to get the opportunity to compete in the NCAA regionals or finals, and meet new people and athletes along the way. During college I am planning on majoring in Business, but possibly minoring in some form of management and society.

Out of track, I am part of NHS and I am a Peer Mentor for the incoming freshmen. Outside of school, I spend most of my time traveling and doing fun and active things like hiking, water skiing, and camping.