Jack Jennings of Mendham, one of the top distance running recruits in the country, announced on Wednesday that he has committed to Villanova University.

Jennings and Murphy, who will now go from rivals to teammates, waged one of the greatest showdowns in NJ XC history at the State Group 3 meet on Nov. 16.

Trailing Murphy coming out of the woods, Jennings used his wicked kick to rally past Murphy with about 100 meters left on his way to winning the Group 3 title in 15:19, the sixth fastest time ever run at Holmdel Park, as he led Mendham to its third straight title. Murphy was second in 15:21, No. 8 in course history. 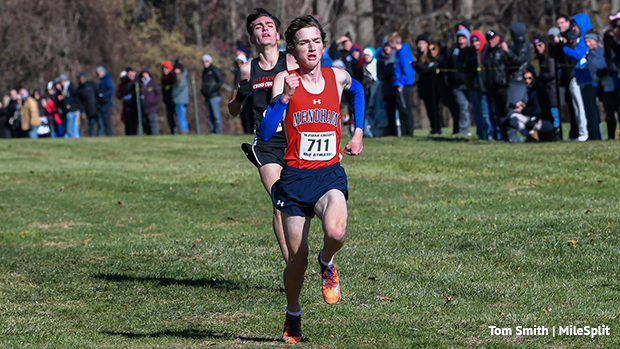 Jennings, whose season will go down as one of the greatest in Morris County history, was sick the week leading up to the Meet of Champions, but still managed to place 14th in 16:12 to help Mendham finish second to CBA, its highest finish ever at the M of C.

Jennings also rewrote the history book at the Greystone layout this season when he ran the two fastest times in course history.

Jennings dropped a 15:07 at the NJAC Championships to break the course record of 15:09 set last year by his former teammate, Jack Stanley. After winning the Morris County title at Greystone in 15:18, Jennings matched his course record when he again ran 15:07 to win the North Jersey, Sec. 2 Group 3 championship to spark Mendham to its third straight title.

Jennings will be back in action this Saturday when he toes the line at the Foot Locker Northeast Regional at Van Cortlandt Park in the Bronx. The top 10 finishers qualify for the FL National Championships on Dec. 11 in San Diego.