Old Bridge simply crushed the boys race and made a huge statement as the Knights returned to the winner's circle for the first time since 2015 and extended its record to 17 GMC titles overall with a 32-81 victory over East Brunswick. South Brunswick, the champs the last two years, placed third with 86.

Individually, Polam, a junior who played J.V. soccer last year, continued his amazing rookie season on the trails by blowing the race apart on his way to a 34 second victory in a school record 15:49, No. 4 in course history for a Middlesex County runner, and the fastest time at the meet since Tim Ball of Piscataway ran 15:35 in 2010. Ball won two Meet of Champions titles in his career (one in XC and one indoors in the 3,200)

In the girls race, South Brunswick, which graduated its top four runners from last year, edged Metuchen, 54-59, to capture its fifth straight title, and Schleif ran away with individual honors with a time of 19:13, 28 seconds ahead of runner-up Eleni Alvarez, a junior from St. Thomas Aquinas.

Schleif, who finished fifth in 19:41 as a freshman last year, joined Rachel Suss, the winner in 2014 and '15, as the only runners in Metuchen history to win GMC XC titles.

The victory by the South Brunswick girls raised its total to 12 GMC titles overall, the second most in meet history behind Old Bridge's 15.

South Brunswick, which averaged 20:08 and had a 1-5 split of just 33 seconds, was trailing Metuchen by six points after three runners crossed, but the No. 4 and No 5 runners for the Vikings combined to pick up 12 spots on the No. 4 and No. 5 from Metuchen to secure the championship.

"For the girls to buy in and work hard and win our fifth in a row is a testament to the hard work and culture that has been established here over the years,'' said South Brunswick coach Wil Rivera. 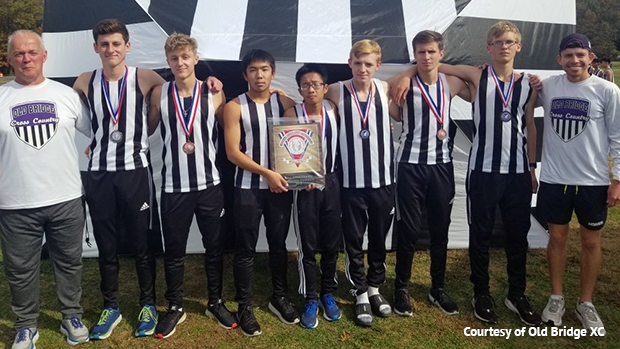 The boys race featured a pair of dominating performances that are sure to grab the attention of the state.

The team performance by Old Bridge is something that will surely make the rest of the Group 4 teams in the state take notice as the Knights made it clear that they should be a major contender to win the Central Jersey, Group 4 title and could be in the hunt for a top spot at the State Group 4 Championships.
Old Bridge pushed its first five runners across the line in the top 12, averaged 16:39, and had a 1-5 compression of just 38 seconds! And the Knights picked up PR's from five of its seven runners.
Old Bridge's top five were senior Michael Keefe, second in a PR of 16:23, senior Charles Harvey, third in a PR of 16:25, junior Steven Tan, seventh in 16:44 ( just off his PR), junior Nicholas Medeiros, eighth in a PR 16:45, and sophomore Kieran Donnelly, 12th in a PR if 17:00.
Polam, who decided to run XC for the first time this fall after dropping big PR's of 4:26.04 for 1,600 and 9:30.80 for 3,200 last spring, continued his rapid rise as one of the state's best runners as he became the third South Brunswick boy to ever win the GMC title. The other two are Eric Slayton (1999 ) and Matt Zamorski (2014).

South Brunswick Coach Wil Rivera knew Polam had the potential for a good XC season, but he's surpassed all the expectations.

"I knew if he committed to running year round he would be really good, but sub 16 twice (at Thompson) and 15:31 at Ocean County Park, and 16:12 at Holmdel has been a pleasant surprise for sure,'' said Rivera. "Vidhur is a hard worker and ultra competitive and wants to be one of the best,'' said Rivera. "He's still learning the sport, but is making progress each race. The sky's the limit as to what he can accomplish in XC, and I think he a legit shot at winning Group 4.