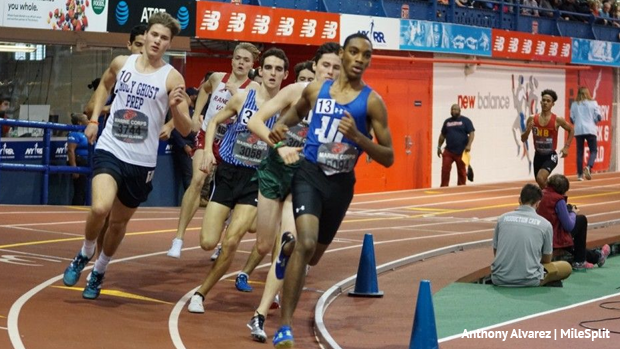 Myles Plummer of Union Catholic on the way to his state leading 1:58.74.

This Friday we are focusing on some of our top freshmen performances so far in 2019. While there may have been some major splits on relays thrown down, we're going to keep it to individual times and marks. We'll be sure to revisit this topic as the season moves along.

Some faces may be familiar from this past cross country season but we've got some new track and field stars on the high school scene as well. 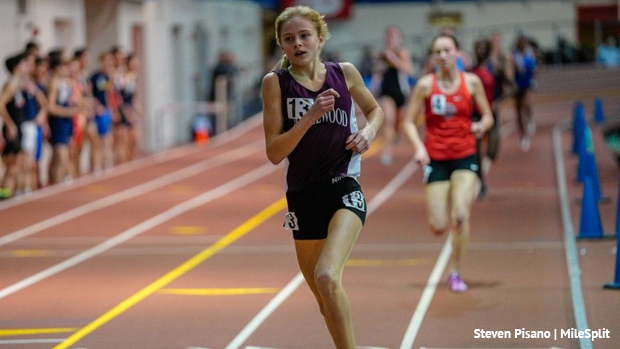 Wennersten is a state leading freshman, she finished third in the Invitational Mile at the Millrose Games Trials on January 9th running 4:58.44! Crossing the line after the star powered Katelyn Tuohy with her 4:19.72, the sixth fastest indoor time in high school girls history, and second place Sarah Trainor at 4:34.25.

This wasn't out of the blue however, if you were following our cross country coverage this Ridgewood freshman showed she is a name you should remember. She led her team to a second place finish at Group 4 State Championships, finishing sixth individually with 19:08 and her Holmdel PR is 18:59. She was also second at her Sectional and finished off the season with a 21st place finish at the Nike Cross Northeast Regional.

One of two freshmen who hold a state leading performance through the first four weeks of the season. Plummer put down a 1:58.74 800 meter at the Marine Corps Holiday Classic at the very end of December. He is the only freshman with a sub-two minute time so far in the country, and he's done it twice already.

Bryanna Craig is certainly one of our strongest up and coming multi-event athletes! She currently ranks top 15 in the state for four different events which span the track and the field. In the 400m she won the Coach Glynn Holiday Carnival posting 58.14, that was the state lead until Athing Mu hit a National leading 53.54 this past week and still holds at NJ#2 the fourth fastest freshmen time in the country.

Before reaching the high school ranks she had plenty of competition experience at the youth and club level. With victories at AAU and USATF Junior Regionals and plenty of success in the pentathlon at their junior championships as well.

Whittle leads all freshmen in the 200 meter dash with his 22.94 from the Marine Corps Holiday Classic at the end of December. And by all freshmen I mean all the freshmen in the United States that have recorded a time so far! In fact New Jersey holds the top two positions, Geraldo Gibson of East Orange Campus is second at 23.26.

Whittle also holds the third spot for freshmen 55 meter hurdlers in the country with a 7.94, that's 23rd overall in New Jersey.

With her 7.22 victory in the 55 meter dash at the Millrose Games Trials Kayce Darby has found herself the fourth ranked freshman in the country. She is also third overall in the state of New Jersey and just one of five to run under 7.30 at this point in the season.

Add in a NJ#12 time of 26.16 and you've got yourself a pretty talented freshman. 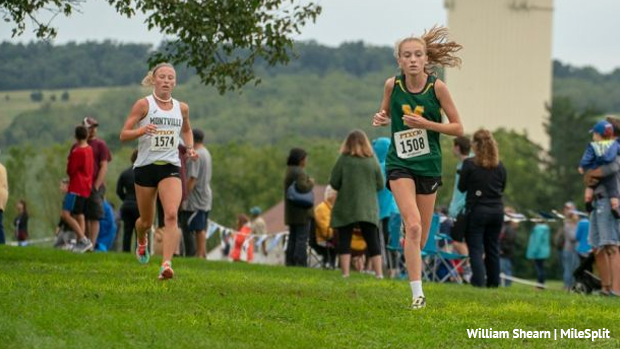 Much like the above mentioned Camryn Wennersten, Montgomery's Caroline Mehlhorn is also coming off a very strong cross country season. She finished sixth at the NJSIAA XC Meet of Champions.

She shines on the track in long distance too, for the 3200m having won the Princeton Invitational Series opening meet at 11:05.15 she is NJ#2 only behind Julia Trethaway's 10:52. The young distance star is also currently NJ#11 in the 1600m thanks to her 5:15.81 to win the Bob James Invitational in December.

She is the second ranked freshmen two miler in the United States.

Madison Orlins of Mendham isn't far behind Mehlhorn in that 3200m event, she is NJ#5 with an 11:16 under her belt, the fifth fastest freshman in the country.

In the field we have two more freshmen standouts to highlight. Melissa Aymil of Mendham threw 39-0 at the Wayne Valentine Invite to move up to NJ#9 and is the top freshman in the country.

Leah Ellis of  Millville is the third ranked freshmen triple jumper in the Nation at 36-08.5 and is also seventh ranked among US freshmen in the long jump with a mark of 17-0.