There were plenty of fantastic performances and a touch of drama on Saturday night during the Middlesex County Relays. The South Brunswick girls won their team title handily scoring 35 more points than the rest of the meet, the boys will have to wait and see if they'll be co-champions with East Brunswick or sole champions.

Two meet records were set. On the track the Woodbridge girls ran a NJ#2 US#13 time of 4:02.35 to set the 4x400m record with a seven second lead on the rest of the race. In the field there was a record setting pole vault relay by East Brunswick's Jake Stocki and Brian McSweeney with a school record total height of 25-06, Stocki clearing 13-00 and McSweeney 12-06.

The East Brunswick boys, who still have a chance at being co-champions for the team title, had four second place finishes and a huge comeback win in the DMR where they ran 10:51.52 NJ#6 and Reyden Davies made up a lot of ground. As mentioned above they also broke the meet record in the pole vault relay at 25-06.

At the end of the meet their 4x400m bid to tie for the team championship unfortunately found itself derailed, read more on that below. 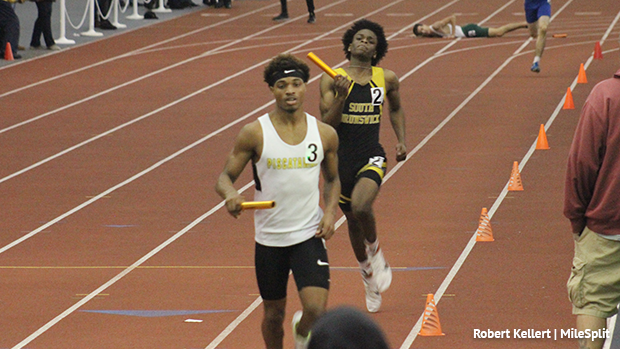 Heading into the boys 4x400m, after a gritty team battle all meet, East Brunswick led the team score with 54 points over South Brunswick's 52. South Brunswick needed to place at least two points ahead to tie for the team championship or more to win it all.

On the last lap Piscataway and South Brunswick were well on their way to first and second place finishes running 3:29.15 NJ#7 and 3:29.86 NJ#10. Farther behind Sayreville and East Brunswick were in a tight race for third place, East Brunswick needing third to become co-champions at this point.

As seen in the race video below, as they came around the final turn East Brunswick's anchor made hard contact with a non-competitor attempting to cross the track knocking their squad down and out of the race.

With a team championship on the line this obviously caused a quite a stir. Eventually meet officials came to the decision to have the 4x400m rerun between East Brunswick and Sayreville, however they won't be running an extra race by themselves.

Instead during the Greater Middlesex Conference Championships on January 12th a race within a race will decide title ownership, if East Brunswick finishes ahead of Sayreville head to head in the 4x400m finale they will be awarded the 6 points they needed to tie South Brunswick at the Relay Championships back on January 5th. If Sayreville crosses ahead of East Brunswick then South Brunswick is the lone boys team champion sweeping the boys and girls titles.

If changes to how this will be decided occur we will update this story. Otherwise keep an eye on that 4x400m relay during the January 12th meet!