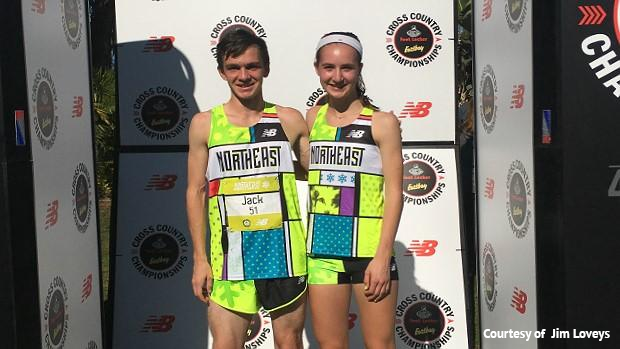 The Morris County duo of Jack Stanley and Abby Loveys, who will be teammates next year at Princeton University, capped off their amazing cross-country seasons by earning All-American honors with sensational performances at the 40th annual Foot Locker National Championships on Saturday at Balboa Park in San Diego.

Stanley, a senior at Mendham, stayed right near the front of the lead pack for most of the race on his way to finishing seventh in the boys race in 15:30.1, and Loveys, a senior at Randolph, placed 11th in the girls race in 17:48.4. The top 15 finishers in each race earn All-American status.

Stanley's 15:30.1 places him No. 11 all-time among NJ runners at Balboa Park, and his seventh place finish is the highest by a NJ runner since the great Edward Cheserek of St. Benedict's Prep won his second straight title in 2011.

What makes Stanley's performance even more incredible is that it was his second national championship race in a week, and both times he earned All-Americn!

Stanley, off the strength of his victory at the Foot Locker Northeast Regional win two weeks ago, was offered an at-large invitation to compete in the Nike National Championships last Saturday in Portland, Oregon. He accepted and finished 19th to in Portland to earn All-American. Then flew back to Jersey, and the few days later he was on a plane to San Diego for Foot Locker Nationals. That's one heck of a distance double!!!!

The 17:48.4 by Loveys, who announced prior to the race that she'll attend Princeton,  is No. 9 all-time by a NJ girl at Balboa Park, and her 11th place finish is the highest for a NJ girl since Megan Venables of Highland Regional was fifth in 2010.

Watch both races in the above embedded video.

New Jersey was well represented in the race with five athletes competing among the 80 runners (40 boys/40 girls) in the two races.

Allentown junior Liam Murphy completed his remarkable rookie XC season by placing 33rd in 16:20.3, and Pingry junior Nicole Vanasse, the NJ Non-Public A state champion the past two years, placed 32nd in the girls race in 18:54.5.

The finish by Stanley puts the finishing touches on a phenomenal season, which also included a course record at Greystone when he won the Morris County Championships in 15:09.3, a victory at the N.J. Sec. 2 Group 3 meet, a second straight state Group 3 title in 15:45, a second place to Hart in the epic finish at the Meet of Champions when they both ran 15:36, and then he ran 15:30.2 to win at the Foot Locker Northeast Regional.

She responded with one of the most dominant seasons in recent state history.

On her road to San Diego, Loveys won the Eastern States Championship race at the Manhattan Invitational in 14:03, the fastest time by a NJ girl on Van Cortlandt Park's 2.5-mile course, and she repeated as Morris County champion when she smashed the Greystone Park course record with a time of 17:07.5, one of the fastest times ever run by a NJ high school girl on a 5K course.

At the state meets, Loveys crushed the course record at Garret Mountain when she won her second straight N.J. Sec. 1 Group 4 title in 17:41, repeated as state Group 4 champion in 17:52, No. 11 all-time at Holmdel Park, and won the Meet of Champions in 17:54.

Then at the Foot Locker Northeast Regional Championships on Nov. 24, Loveys placed fourth in 17:49.4, No. 6 all-time on the NJ list for Van Cortlandt Park's 3.1-mile course to earn her second straight trip to San Diego.