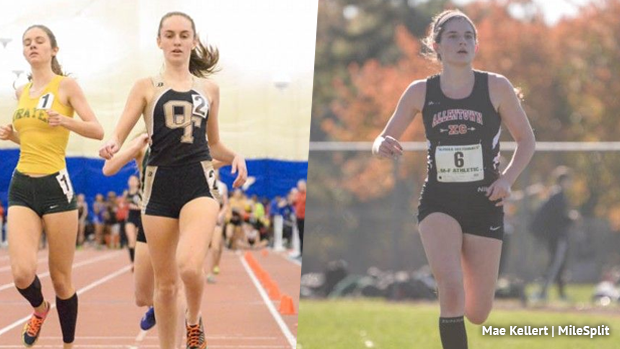 If you are looking to announce your commitment send it to rkellert@milesplit.com with any relative information. Meet of Champions winners, if you would like to announce with a full interview let us know as well.

O'Sullivan is one of the best mid-distance stars the state has to offer, in the fall when she isn't competing on the track she's playing soccer. She has two indoor Group 3 state titles in the 800 meter and one in the 1600 meter run. She also has two top six 800 meter finishes at the Meet of Champions so far in her career.

Devon Hoernlein to the University of Pittsburgh

Allentown star senior Devon Hoernlein announced Monday on twitter that she has committed to the University of Pittsburgh. The distance specialist has multiple Mercer County and Sectional titles on her resume and had two top six finishers at the Meet of Champions in the 3200 meter last year between indoor and outdoor.

Excited to announce that I have committed to University of Pittsburgh to continue my academic and athletic career! #H2P @NJMileSplit pic.twitter.com/gpc3BZjQxD

Academy of the Holy Angels teammates Caroline McGann and Tara Lyons have both committed to Bucknell University, announced last week by Paul Schwartz.

Caroline is a two time Non-Public A State Champion in the pole vault, she is also coming off three straight top ten finishes at the Meet of Champions in the event between the indoor and outdoor seasons. She has an indoor pr of 11-0 and an outdoor height of 11-9 and is ranked fourth among all outdoor returners in the state.

Tara Lyons has performed well in mid-distance events at the county and sectional level and finished fifth at the 2017 Non-Public A State Championships in the 800 meter run. Her personal best at that distance is 2:15.43 outdoors and 2:23.60 indoors.