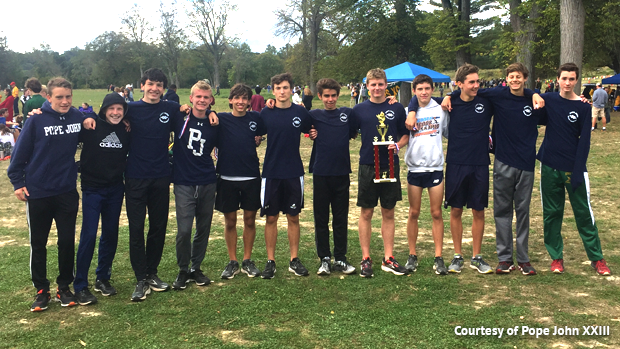 Alexa Westley of Warren Hills, Chris Romero of Voorhees, and the North Hunterdon and Pope John boys ruled the day by shredding the newly designed layout at Greystone on Saturday at the Stewart Memorial Invitational in Morris Plains.

Westley and Romero threw down the fastest time run so far on the new Greystone course, which is just a few weeks old.

The other two individuals winners were Ray Sellaro, who ran 15:53 to lead NJ #5 North Hunterdon to the boys A Division team title, and Morgan Mehmel, whose 19:03 led a 1-2-3 finish for B Division team winner Villa Walsh.

On the girls side, Watchung Hills averaged 20:33 and edged Bridgewater Raritan, 53-56 for the A Division title when its No. 5 runner beat Bridgewater's No. 5 by 11 spots.

With the NJAC, Morris County, N.J. Sec. 2 and NJCTC Championships all being held at Greystone later this season, it will be interesting to see how much if any the course records run today by Westley and Romero come down, and what the conversion times from Greystone to other courses will look like.

And with the championship portion of the season just a couple weeks away, it's time to start thinking about how fast the Hunterdon-Warren-Sussex and Skyland Conference races will be when Romero, Sellaro and Justin Cornetta of Hunterdon Central square off!!!! Course records will be on shaky ground for sure!!
Tweets by NJMileSplit