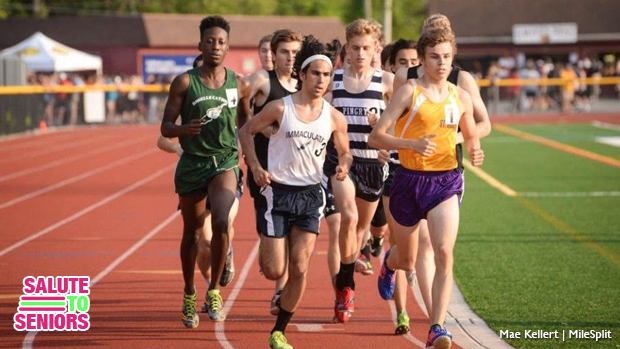 What was your most memorable race/moment?

My most memorable race was, by far, this past Sectional Championship 1600m. I was going into the race with the mindset that I had to win at all costs. If I didn't qualify for Groups, it would be the last time I would ever compete for my school. And I knew I couldn't lose in front of my friends and family. My coach was telling me about my competition, and I started to really get nervous knowing what was at stake: going home devastated, or having a shot at competing in the MOCs. I wanted the latter.

The gun went off, and immediately I took it out hard. It had been a super hot day, and I wasn't feeling 100%, but I wanted nothing more than to win that race. So I went right up to the lead pack and sat on the shoulders of some great milers as we came through the 400 at a reasonable clip. But I started feeling the pace early on and my legs started to feel heavy. Through 800, I saw the leaders getting away, but I knew if I wanted to win I would have to be up there with them. So I pushed down the back straight, and soon I was there in the top 3 through 1200 battling for the gold. As we hit the bell, I heard my friends, coaches, and teammates screaming at the top of their lungs, and it was at that moment I knew that I had to win it for them. I pushed the first 200, moving into first, and tried to hold them off. But coming around the last curve, I heard footsteps and heavy breathing behind me and saw two singlets try to move around me on either side. I came into the race wanting to win, and I wasn't going down without a fight. It was absolutely neck and neck, and I was kicking with literally everything I had down that last 100, harder than I had ever kicked before. But in that last 5 meters, my legs gave out. I felt them collapsing underneath me, and I saw St. Rose just edge me out at the line. I had lost by two tenths of a second.

In that moment, though, I was happy. Even though I hadn't achieved my goal of first place, I knew I poured everything I had into that race. I knew I had the support of my friends and family, and I looked up to see smiling faces and open arms. It was everything I could have ever wanted from my high school running career and nothing else. I'll just never forget that feeling.

The boys at Saint Joseph's Metuchen (looking at you, Kevin, Lucas, and Taras!) were my biggest rivals. We'd always text each other our new PRs and would race for blood whenever we were in the same race. They made competing tons of fun and gave me a challenge to look forward to every weekend.

Making it to the Outdoor Meet of Champions this year was my biggest achievement. I knew it was where I wanted to be since my freshman year, and to actually be there and compete against the best in the state was not only thrilling but incredibly humbling.

If you could do it all over again what would you change about your running career in high school?

TRAINING IN THE SUMMER! I can say with confidence that I did not take running seriously until the summer leading up into my senior year. I'd always been lazy and would skip workouts all the time, but it was when I saw the potential there was to be great that I began to train to win. Don't be like me! 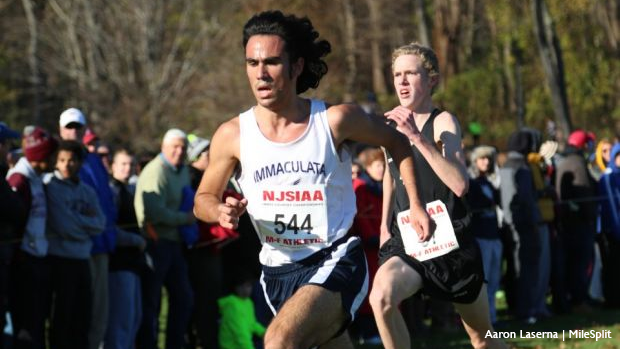 I think the most difficult obstacle was bouncing back from appendicitis after the Skylands Conference XC Championships. I just remember wanting to break 18 but running a high 19 and blaming the crippling stomach cramps on a big breakfast, but later that night I had terrible nausea, went to the hospital, and was put under anesthesia for an appendectomy. The recovery was rough. I asked the doctor if I could run, but he said the risk of breaking the stitches were too high and I would have to rest for the next month. It was so hard and depressing not being able to do what I loved, and even after I was cleared to exercise, I couldn't get back to my XC form and an ankle injury prevented me from training the way I wanted. Looking back at that experience and where I am now, I'm glad I pushed through and trained to the best of my ability.

I'm just going to miss lacing my spikes up for my school. I had kind of a meditative moment on my cool down after the sectional 1600m. I was running through the field and looking at the bright lights of the stadium, and just thinking "This is it. This is my high school career right here." I started out as an awkward, shy freshman, and look at me now! I couldn't help but stop and just look out at all the kids who had one, two, or three years left on their clocks, running and laughing with their teammates, and knowing that my time as a high school athlete was running out. When you're in high school, you feel like you're gonna be there forever. But it's only on the car ride home from graduation, tassel turned and diploma in hand, do you realize that four years go by too fast.

Don't ever, ever, EVER give up. The seniors on your team have been exactly where you are: nervous, and perhaps frustrated. I always tell the freshmen that I couldn't run the length of a football field without stopping to catch my breath when I was their age. But perseverance is key. Set a goal and work towards it. You might not think you'll see the end of mid-pack finishes and pity claps, but if you set your mind to working towards where you want to be, you will most definitely be on your way to greatness.

My coaches is the only reason I've gotten to where I am today. They've pushed me so hard to work to my full potential and changed my views on what I thought was possible in running. And my boy, coach Chris Heibell, has taken me from being your average 4:50 miler to a 4:28 MOC qualifier, and I can't thank him enough for sharing his expertise and always giving me something to work towards.  Like his 1600m school record. Sorry Coach, but I'm the captain now. But in all honesty, he's a spectacular coach and is going to be pumping out some great athletes in the next few years. Immac XC is going back on the map!

I'll be studying part-time at Raritan Valley Community College in the fall and working. I'll still be training hard and competing in any open meets and road races I can find throughout the year. So yes, colleges, I'm still on the market!

I want to say thank you to my family, first of all, for taking some sweet running pics of me throughout my running career and to my dad who taught me the importance of hard work and perseverance. I'd also like to thank my awesome teammates for always being there for me when I needed a student section. And of course, I'd like to thank Maddie too for always giving me nice hugs after races.