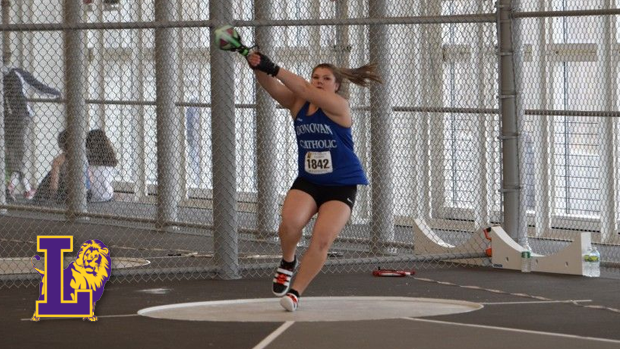 Alyssa Wilson had a fantastic day in both the Shot Put and Weight Throw. / Photo by Kyle Brazeil for MileSplit

The first major multi-state high school meet at the new Ocean Breeze Track and Field Facility happened this past Saturday with the 62nd running of the Bishop Loughlin Games.

We have to start with Alyssa Wilson of Donovan Catholic who opened up her season with a New Jersey state record and a national junior class record in the shot put! She threw for 54-5 to win the meet by well over 10 feet and out shined her previous indoor best of 48-6.5. This performance broke the girls shot put state record set by Nicole Sims of Plainfield in 1991 at 51-9.5. The previous national junior class record holder was Heather Colyer of East Juanita High who threw 53-5.75 in 1997.

Wilson wasn't done there as she also took second in the weight throw with a mark of 50-10. With this just her first meet of the season Wilson has some big goals ahead as stated in the interview below.

Continuing with New Jersey event winners, Alyssa Aldridge of Mainland Regional took first in the two mile run clocking in at 10:42.25. Aldridge is coming off an impressive sophomore cross country season where she won the Meet of Champions and went to Foot Locker Nationals. Normally she swims during the indoor season so it will be interesting to see how much we see of Aldridge as we move along.

In the girls freshmen sprint medley relay Winslow Twp sprinted to victory with a 4:37.29.  Check out the list of New Jersey National Elite Standard performances below for more girls highlights.

On the boys side Cory Poole of East Orange Campus showed why he was listed as a top returner this season winning the 55 meter hurdles with a time of 7.35 in the finals and getting there with a PR and US#1 time of 7.33 in prelims. The first time under 7.50 for Poole, he was third at the Meet of Champions last winter.

Poole had more to add to the table on Saturday with a leg of the East Orange 4x200 meter meet winning team. The boys ran themselves to US#2 with a time of 1:30.51.

Here is an interview with Corey Poole by Kyle Brazeil of MileSplit NY.

Jackson Memorial's senior Ryan Rafferty won the mile run with a time of 4:21.24. This is a great sign for him because at this same point last season he ran six seconds slower before dropping to 4:20 the following month.

In the boys shot put Luke Grodeska of St. Rose, the winner of both the indoor and outdoor Meet of Champions in 2015, placed first with a mark of 58-4. He holds an indoor PR of 61-3.5 which he threw while winning the state championship last year. He's now ranked US#5 for this young indoor season.

Yet another nationally ranked performance from this meet, the Morris Hills boys ran their way to the US#1 spot in the 4x800 meter relay with a time of 8:06.78.

Check out even more of the top New Jersey performances below where we list the National Elite Standard making times, marks, and heights. 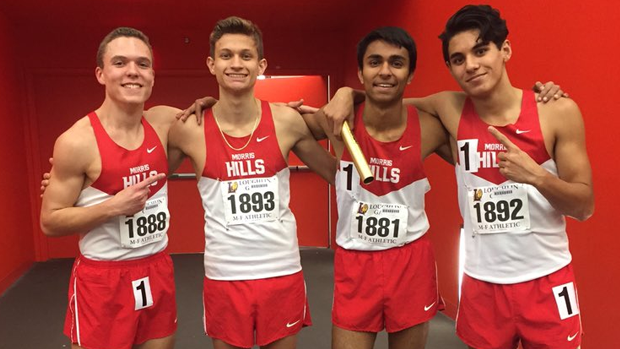