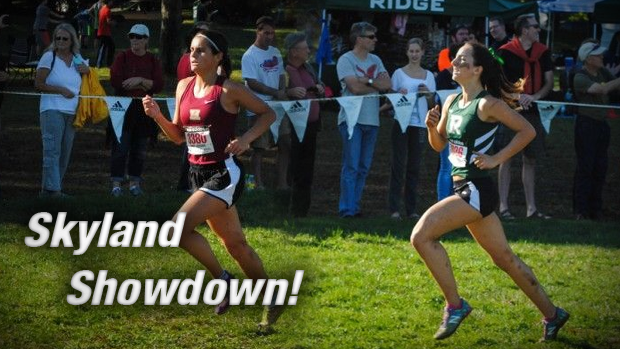 Original Photos taken by Meg Kellert at the Shore Coaches Invitational for MileSplit.

Rewind to October 15th at the Somerset County meet, which was hosted by Ridge HS at Pleasant Valley Park, top teams in the state face off as Hillsborough defeats Ridge 38-49.

Now back to Skyland Conference Championships at Natirar in Peapack and Gladstone, NJ on Monday October 27th. It is a beautiful day and we once again see multiple ranked teams facing off with Hillsborough, Ridge, and Voorhees all competing among others who are at the top of the state.

With the individual title between multiple talented athletes, we see the same individual winner as Somerset cross the line with Stephanie Mauer a junior from Hillsborough running an 18:39. Right behind her Paige Petty of Bernards in second with 18:40, Hannah Bonaguidi of Delaware Valley third 18:41, and Kelly Shaffer of South Hunterdon 18:41. THE FIRST FOUR athletes cross the line in a matter of three seconds between each other.

The key place being that one card by Mauer, who set a personal meet best and who has successfully placed in the top ten in all three of her career Skyland performances.  That point was the beginning of a showdown between NJ#2 Hillsborough and NJ#5 Ridge. The next scorer in that battle was the number one runner for Ridge senior Abigail Regner in fifth with 18:57, after her teammate Liz Newman in 8th with 19:10.

Ridge now with the lead and two scorers home both squads would go back and fourth from 12th to 14th in the heart of the race.

Hillsborough now has 27 points with three runners across the line and need to catch up a finisher to Ridge's four. Hunterdon Central interrupts this dance with Christina Laritz placing 16th with 19:40. That is big because Hillsborough then crosses the final two of their top five, Morry Doyle in 17th at 19:43 and Olivia DeLorenzo 18th 19:43. Hillsborough now has the upper hand with all five across and 62 points! At this point Ridge has 41 points through four runners and cannot place any higher than 20th without pushing this to extra scorers.

A mad dash comes down the final stretch as three runners are neck to neck. 19th place is called out for North Hunterdon's Kelsey Farbanish at 19:47 and right with her clocked at the same time in the results two Ridge runners. Catherine Giuseffi gets the golden 20th position Ridge was looking for!! Teammate Shayna Bains right there with her in 21st!

The final score: Ridge 61 - Hillsborough 62. What a race. And let's not forget another top ranked NJ team was in the mix as Voorhees placed third with 100 points. What a stacked conference race!

On the varsity boys side the team race may not have been as close but that doesn't mean it wasn't as exciting! The Voorhees boys, not racing with one of their top guys Nick Raefski, managed to not only take the team title at Skyland but broke the meet record for a team average with a 16:20 averaged run!!! They have been NJ#2 for a while now and they are showing why more and more each week!

The record breaking run was led by an amazing 15:51 individual championship by Chris Thompson. This was his first individual title as he dropped 10 seconds from his 2013 time at this meet when he came in fourth. Also placing in the top ten were Robert Whitney in fourth with 16:05 and Brenden McGill in eighth with 16:26. The full team performance by Voorhees can be found in the table above. Great stuff!

A hat tip should also be noted for Chris Negri of Watchung Hills Regional and Samuel Layding of North Hunterdon who both broke 16 minutes in the race as they made their own attempts at an individual title. Nice running boys!

Thompson takes gold in around 15:50! pic.twitter.com/iBUrHFkOVc